Hammond, Clarkson and May will be going online only, starting in 2016

The speculation over the future of former Top Gear presenters has come to an end, as the team have announced that they have signed a contract with Amazon Prime, the £79 a year streaming service.

Richard Hammond, Jeremy Clarkson and James May have been the subject of much discussion, after the trio agreed to leave the BBC show Top Gear, following the dismissal of Clarkson due to a "fracas". The fracas in question was the punching of show producer Oismin Tymon, over the lack of hot food available after filming. Over 1,000,000 signatures were put on a petition for Clarkson to be reinstated, but the BBC decided not to renew his contract. His colleagues, Hammond and May, as well as the show's long time executive producer, Andy Wilman, also decided to leave Top Gear.

It was rumoured that the trio would move to rival broadcaster ITV, before it came to light that their contract blocked them from hosting a car show on a UK TV channel for two years. Netflix was also rumoured to be a consideration, but they finally landed with Amazon. For those wondering, Amazon Prime is technically an American company, which is why they are permitted to do a car show, even though it will be shown in the UK.

On working with Amazon, Jeremy Clarkson said: "I feel like I've climbed out of a bi-plane and into a spaceship."

Richard Hammond added: "Amazon? Oh yes. I have already been there. I got bitten by a bullet ant."

James May said: "We have become part of the new age of smart TV. Ironic, isn't it?"

Clarkson later expanded on the new working relationship with Amazon. He stated that they will have full editorial control, and will be free to make whatever kind of show they want. "Amazon has been delightfully clear on that. 'Just make the show you wanna make, guys'. Music to my ears." He also stated that the show will be "seriously well funded". This may certainly be the case, as the Mirror reports that the deal may have seen the trio get £6million each.

The new show is expected to launch in early 2016, exclusively on Amazon Prime. To watch it, you will need to be a Prime subscriber, which currently costs £79 a year, with student pricing available. This subscription cost covers two-day shipping on Amazon purchases, a music and video streaming service, a Kindle lending library and photo storage.

Hammond, Clarkson and May have signed to produce 36 episodes of the new car series over the course of three years. No name has been announced for the new show yet.

Speaking about the new deal, Jay Marine, the vice president of Amazon Prime Video EU said the following."Customers told us they wanted to see the team back on screen, and we are excited to make that happen."

"Our approach is to give program makers creative freedom to be innovative and make the shows they want to make."

Chris Evans has recently been announced as the new presenter of the BBC Top Gear. His co-presenters are yet to be announced. 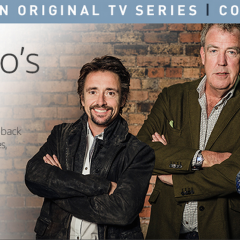 Top Gear presenters have found a new home on Amazon

Hammond, Clarkson and May will be going online only, starting in 2016