The resignation of Chancellor Rishi Sunak and Health Secretary Sajid Javid has put the PM in a precarious position.

Chancellor of the Exchequer Rishi Sunak and Health Secretary Sajid Javid outlined their reasons for resigning as a loss of confidence in the ‘integrity’ of this government. This has been prompted by the PM’s knowledge of sexual misconduct allegations against former deputy whip Chris Pincher, and lack of action regarding these allegations.

Since then, various aides such as Laura Trott and education minister Will Quince, have resigned. Alongside this, MPs have sent letters expressing their lack of confidence in the Prime Minister.

Big names that remain loyal to the PM include Priti Patel, Michael Gove and Nadine Dorries, all who have ruled out resigning. On Tuesday 5 July Nadhim Zahawi replaced Sunak as Chancellor of the Exchequer, offering a small sense of stability to Johnson’s ever wavering position. Reports suggest Zahawi threatened to resign if he was not offered the job, a statement he has since denied.

The resignations of Sunak and Javid came after days of obfuscation and misleading statements by members of the cabinet and staff at number 10, who tried to say Johnson knew nothing about these allegations when he appointed Pincher to the role of deputy chief whip. It has since come to light that he was briefed on the allegations,  and he subsequently apologised, blaming it on a lapse in memory. Pincher has since been suspended.

However, an apology was not enough for top ministers, with Sajid Javid being the first to hand his resignation in. Rishi Sunak later followed tweeting:

“The public rightly expect government to be conducted properly, competently and seriously.”

“I recognise this may be my last ministerial job, but I believe these standards are worth fighting for and that is why I am resigning.”

This latest scandal appears to be the straw that broke the camel’s back, with ministers and MPs who have previously defended the PM after having been found to have broken the law now calling for him to go.

Similarly the public have lost confidence. A snap poll by YouGov suggests 69% of voters, a majority of which were Conservative voters, think Johnson should go. Labour and Keir Starmer have also called for the PM to quit and call for a general election.

After successfully seeing off a Conservative party vote of no confidence earlier this year, in theory his position is safe for another year. However, if rebels seize control of the 1922 Committee they could scrap the compulsory one year gap between leadership challenges. Equally, if enough of his cabinet tells him he needs to go, he may have no other choice.

With the recent Wakefield byelection defeats, adjacent to Johnson losing ministers thick and fast, this government feels fragile and far away from the one who won a majority in 2019.

At time of writing there have been 35 resignations. 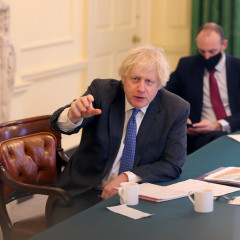 The resignation of Chancellor Rishi Sunak and Health Secretary Sajid Javid has put the PM in a precarious position.