Here’s everything you need to know about who won big at the BAFTA Games Awards 2022.

Hosted by Elle Osili-Wood, the year’s in-person ceremony was also live-streamed on Twitch, YouTube and Facebook – it was then shortly followed by a post-show party exclusively on streaming giant, Twitch.

If nominations were anything to go by, Housemarque’s sci-fi game Returnal certainly lived up to its hype, winning four BAFTAs: Audio Achievement, Best Game, Music and Performer in a Leading Role for Jane Perry.

Accompanying Returnal’s success with two wins each is It Takes Two (winners of Multiplayer and Original Property), and Ratchet & Clank: Rift Apart (winners of Animation and Technical Achievement).

Taking home the coveted EE Game of the Year Award, voted for by the public, is Witchbeam’s relaxing game Unpacking – a game about taking things out of boxes and uncovering a life through the process. Unpacking co-creators Tim Dawson and Wren Brier received the award and later collected another BAFTA for Narrative.

Kimberly Brooks is another first-time performance winner, securing a BAFTA win for Performer in a Supporting Role for her work as Hollis Forsythe in Psychonauts 2.

The hand-drawn adventure game, TOEM, won the Debut category. Whilst Artistic Achievement was nabbed by The Artful Escape, the game is about a guitar prodigy who sets out on a psychedelic journey to inspire his stage persona and confront the legacy of a dead folk legend.

PERFORMER IN A LEADING ROLE

PERFORMER IN A SUPPORTING ROLE

EE GAME OF THE YEAR (voted for by the public) 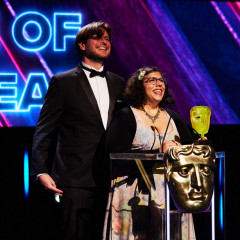 Here’s everything you need to know about who won big at the BAFTA Games Awards 2022.