Brighton Fringe is England’s largest arts festival, and with 250 events already booked, a further 100 are being added in time for the second release of tickets today, Friday 4 February.

Brighton Fringe will now feature the likes of Brighton’s Singing Barber, Peter Joannou, immersing Agent November Escape Rooms, as well as indoor events held at the Brighthelm Centre, as well as mystery trails to solve as you wander around the city.

The second release of acts also includes Maisie Adam, star of Mock The Week and Live At The Apollo, as she brings a work in progress show to the fringe. It also features acts such as Russell Hicks, whose excellent improvisation and crowd work skills have wowed audiences around the country.

Led by Belle de Beauvoir and Beatrice Valhallah, the Big Band Burlesque will take over The Rialto Theatre, hosted by Chanteuse and violinist Oriana with music provided by jazz reprobate Pete Saunders and his band.

Former Chumbawamba vocalist Dunstan Bruce also performs his new one-hour play Am I Invisible Yet?; but this is no cosy fireside chat reminiscing about his 'tubthumping' past - it's a vital blast of angst, anger and despair. It is Theatre du Coeur, a love letter to hope, humanity and the haphazard heart.

Fringe City will also return for 2022, offering a series of workshops and talks alongside outdoor performances, bars and street food. Families are invited to celebrate the launch of Brighton Fringe at the Family Picnic on 7 May at Royal Pavilion Gardens.

The final deadline for registration to Brighton Fringe 2022 closes at 17:00 on Friday 18 February. If you’re interested in taking part visit: brightonfringe.org/take-part/ or get in touch with the Brighton Fringe Participant Services team at [email protected].

The final events of the Brighton Fringe 2022 programme will be announced on Tuesday 1st March, with general sale at midday on Friday 11 March. 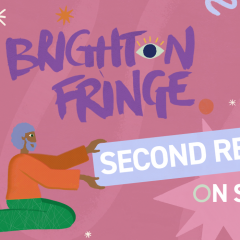