Activist Kate Wilson has been awarded compensation for being deceived into a relationship by undercover police officer Mark Kennedy. Wilson had been involved in a relationship with Kennedy between 2003 and 2005, during which time he hid his identity in order to infiltrate political groups that she was involved in.

Wilson only discovered Kennedy’s true identity in 2010 after campaigners exposed him as an undercover officer. After a decade spent campaigning for justice, Wilson has finally succeeded, with the Investigatory Powers Tribunal (IPT) ruling that the Metropolitan police and the National Police Chiefs’ Council (NPCC) must pay Wilson a total of £229,471, “by way of just satisfaction for the breaches of her human rights”. In a ruling last September three judges in the IPT stated that through his deception of Wilson, Kennedy had “grossly debased, degraded and humiliated” her.

Kennedy was not acting alone and was one of at least 139 undercover officers who have infiltrated more than 1000 political groups since 1968, most of these groups being left-wing or progressive. He also allegedly reported back to higher ups about the relationship, with IPT ruling that his senior officers “either knew of the relationship [with Wilson], chose not to know of its existence, or were incompetent and negligent in not following up on the clear and obvious signs”.

Kennedy infiltrated several political groups across a span of 7 years, and according to Wilson had sexual relationships with 11 women, including a six-year relationship with one woman, whose intimate photos were kept on police files after having been retrieved from Kennedy’s phone.

As many as 30 women have stated they were deceived into relationships by undercover police officers, and the Met has admitted to officers forming “abusive and deceitful” relationships with 12 women including Wilson. These women were awarded compensation by the Met after they took legal action in civil courts, however, Wilson decided to continue her case through the IPT.

Wilson fought most of the case herself as she was unable to afford a lawyer and IPT judges praised her “tenacity and perseverance”. On Tuesday, Wilson said: “The finding that these operations breached the rights to freedom of expression and assembly and were unlawful amounts to a long overdue recognition that spying on protest movement is political policing and has no place in a democratic society.

“It is important, because it goes beyond the scandal of undercover officers deceiving women into intimate relationships. Violating our political rights was the entire reason for these deployments and thousands of people will have had their political rights violated in this way.”

There is currently an inquiry taking place into the scandal surrounding undercover officers’ behaviour, headed by Sir John Mitting, but it has moved incredibly slowly, having been instigated in 2014 with hearings continuing until at least May of this year.

In a previous hearing which included Wilson, the opening statement described the impact of officers’ actions on the women involved. “Some of these relationships have led to children being born; others have deprived the woman involved of the opportunity to have children, because she has spent her childbearing years in love with a man who despite proclaiming his desire to have a child with her, never had any intention of doing so (frequently because he was married and had children in his ‘real life’).

“Many of the women have had significant and long lasting difficulties with subsequent relationships, because genuine partners have been compared with the idealised relationship constructed by the undercover officer, and/or because their ability to trust has been completely shattered. Careers and life choices have been derailed. All of the women, on discovering the truth, have had their personal histories, their sense of self and their ability to trust destroyed.”

In an event last year covering police corruption, the Scottish campaign group Not One Rogue Cop shared information on spy cop tactics, some of which they themselves had experienced. They explained that one of the alleged prerequisites for being put in an undercover policing role is to have a wife and children at home so that women within the organisations they are infiltrating cannot “tempt” officers to stray away from their job. This was indeed the case with Mark Kennedy at the time of his relationship with Kate Wilson.

However, there are no rules or codes against having relationships with women when undercover, with officers even reporting back to higher ups or even teams of officers on relationship decisions such as moving in together, meeting parents, etc. The Tradecraft Manual, which is used by undercover officers to guide their behaviour, does not explicitly forbid relationships, saying that they “are fraught with difficulty and you must make your own mind up about how to proceed. If you have no other option but to become involved with a weary, you should try to have fleeting, disastrous relationships with individuals who are not important to your sources of information.”

Not One Rogue Cop say that undercover police reportedly use a tactic called “middling” to get close to women as a means of entering an organisation. “Middling” refers to extensively researching a woman they have targeted so that they can appear to be the perfect partner, matching her interests and hobbies and even connecting on major life events. This also matches up with Wilson’s experience. She shared that “he claimed to be from an area near where I grew up, he claimed to like the same sort of music that I liked, and to share a lot of my interests.

“I believe that these relationships were used as a tactic, the police are trying to say that this was a terrible mistake, it should never have happened – I don’t believe that’s the case at all […] I believe that they used women as a tool in their undercover operations.” 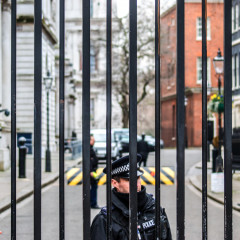 Activist awarded compensation after being deceived into relationship by undercover officer