Labour has revealed that the MoD has wasted £13 billion worth of taxpayers’ money since 2010, but this failing is just one example amongst many when it comes to government spending.

The Ministry of Defence has been accused of wasting £13 billion worth of taxpayers’ money since 2010. The report from Labour has analysed MoD spending since the Conservative and Liberal Democrat coalition of 2010, through previous Conservative governments, and up to the current one.

The Labour Party has made this accusation after data gathered independently highlighted 67 waste cases, many of which include cancelled contracts or projects that went over budget. Currently none of the 36 total major projects that the MoD is currently funding are rated as green, which would signify that the project is on time and on budget.

Of the £13 billion wasted by the MoD, £4.8 billion has been lost to cancelled contracts and £5.6 billion to overspending on existing projects. Some examples of these include an extra £1 billion spent on building a new nuclear warhead manufacturing facility, which is already 76 months behind schedule, and another £1 billion more than originally planned spent on building seven Astute Class attack submarines.

Another £4 million was lost on a scrapped new IT system, with the MoD saying that it “ultimately decided not to pursue the project further due to the rapid pace and change in technology". Money has also been lost on scrapped equipment such as a £213 million write-off of hundreds of armoured vehicles that had originally been acquired for the wars in Iraq and Afghanistan.

A statement from the MoD has defended “taking tough decisions to replace old equipment and halt programmes that no longer fit requirements” despite their costs. A BBC defence correspondent, Jonathan Beale, has said however that overspending on defence is not specific to the Conservatives. The last Labour government was accused by the Tories of creating a £40 billion “black hole” in the MoD budget.

However, the Conservative government’s MoD spending failures can also be considered alongside other expenditure failings, or contrasted with cuts to areas such as social care. With projects such as HS2 and Test and Trace haemorrhaging millions of pounds out of government budgets only to in some way fail or be abandoned, there seems an apparent amount of negligence and recklessness in the way that the government has handled money.

Expenditure failings during the pandemic

This negligence at times also seems to stray into corruption, with pandemic related projects such as Test and Trace being an alleged example of this. As of March 2021, £37 billion had been funnelled into Test and Trace but a damning report in October 2021 states that the project has failed at its main objective. It also revealed that the failing programme was still paying a number of contractors an average of £1,100 a day, with some paid more than £6,000 a day.

A report from Transparency International analysed the contracts that the government awarded for Covid related purposes between February and November 2020. It found that at least 73 contracts – worth a total of £3.7 billion – were thought to “merit further investigation” by the organisation. Transparency International identified that at least 24 PPE related contracts, worth £1.6 billion, were awarded to “those with known political connections” to the Tory government. 13 contracts totalling £255 million went to ten firms that were all less than 60 days old.

It was around this time that the government also awarded several large contracts to companies to provide free meals to schoolchildren during the pandemic. One company, Chartwells, was thrown into the spotlight after a mother shared an image on social media of the disappointing “hamper” that had been provided by the company. The food included in the parcel was inadequate to properly sustain her child and did not match up with the alleged amount that the company had valued the parcel at.

Other parents shared similar experiences, with other companies such as Bidfood and Brakes also coming under fire for failing to provide adequate school meals. Many parents also questioned why they no longer had access to the £15 a week vouchers they’d had previously which had allowed them to better feed their children.

A company called Edenred had been awarded a £234 million contract to provide school meal vouchers but had botched the project, leaving children in the pandemic stuck at home without sufficient access to food. The system was said to eventually improve but in December 2020 it was also revealed by the National Audit Office that the company had received contracts worth up to £425 million (including the original £234 million contract) despite “limited evidence” of its capacity to deliver. In March 2021 the company was awarded a new contract worth £190 million.

Who gets cuts and who gets funding?

Not only is this mismanagement of funds likely to worry much of the public, it also may appear perplexing or even hypocritical when contrasted with the government’s lack of spending in other areas. There have been cuts to crucial safety nets like universal credit and child benefit – all services that serve an immediate and necessary purpose. Defence spending, meanwhile, more often deals in hypotheticals and pre-emptive action.

The recent universal credit cut for instance has pushed large amounts of people into poverty, with thinktank Legatum Institute estimating 840,000 people have been impacted. The temporary £20 a week increase that was added during the pandemic had made all the difference at a time when many people are unable to access sufficient work, and once taken away it left a devastating impact.

Government cuts to health and social care have even been linked to austerity-caused deaths and a slowdown in life expectancy improvement. Research published in BMJ Open in October 2021 showed that there had been 57,550 more deaths than expected between 2010 (when austerity cuts were enforced) and 2014. The research also found that life expectancy improvement had stalled to a worrying degree during this time, with the worst hit areas predominantly in the north of England.

Shadow health secretary Jonathan Ashworth stated in relation to the study’s findings: “This is a devastating verdict on a decade of Tory austerity in healthcare… The test of ‘levelling up’ will be ministers properly funding social care and public health to now tackle these inequalities.”

When lives have been lost due to under-spending in essential sectors such as health and social care, it raises questions as to why over-spending has been allowed to continue in a sector that, in essence, furthers the loss of lives. A defence budget should come second if the people it is defending are without sufficient food, shelter, and care. 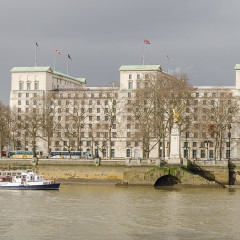 Labour has revealed that the MoD has wasted £13 billion worth of taxpayers’ money since 2010, but this failing is just one example amongst many when it comes to government spending.