An artist collective based out of Belfast, Array Collective, have won this year’s Turner Prize for their installation piece The Druithaib’s Ball that recreates a síbín or illicit bar that explores the collective’s relationships with their home of Northern Ireland.

The Turner Prize has been awarded every year since 1984 to a British artist, be that an artist born in Britain or working in Britain primarily. The prize is £40,000 – £25,000 to the winning artist and £5,000 each to the others shortlisted. This year the judges chose to exclusively shortlist collectives, rather than single artists, partly as a practical matter relating to the pandemic, when many artists have had to cancel shows and exhibitions, and partly as a political statement to celebrate cooperative social action.

The winners this year are Belfast-based Array Collective, who describe themselves as a group of individual artists “who join together to create collaborative actions in response to the sociopolitical issues affecting Northern Ireland”. The group’s winning piece was an installation recreating a síbín, which the installation used as a space to celebrate and critique Northern Ireland and its history along with current issues.

The síbín features banners protesting for reproductive rights and against conversion therapy, and is filled with intricate details, all in some way relating to Northern Ireland’s history. Sighle Bhreathnach-Cashell, one of the members of the collective described the meaning behind the piece.

“Our síbín is almost like a self-portrait of Northern Ireland. When tourists come to Northern Ireland, even English tourists, people always say how friendly the place is, sitting alongside the conflict. The irony of that is not lost on us. But we were also consciously thinking, ‘Let’s make [our instillation] a comfortable place, so that people can sit there and absorb it and take time with it.’”

The space is intended to be warm and comforting, letting visitors sit and absorb the trauma and conflict present in the story of Northern Ireland in an atmosphere that allows them to come to terms with what they are seeing in their own time. The setting also allows the collective to inform rather than lecture, which can transmit their meaning better to those who may be more unwilling to listen. Collective member Stephen Millar astutely noted: “Where would you rather be, the pub or a gallery?”

The prize organisers commended the collective’s work, saying that it confronts “urgent social and political issues affecting Northern Ireland with humour, seriousness and beauty”. Alex Farquharson, director of Tate Britain and chairman of the Turner Prize jury, also praised their work, saying that "what the jurists were drawn to, I think, was both a combination of the seriousness of the issues they're dealing with, in a very divided world, but the joy, the hope, the fun, the surprise...with which they do their political work as artworks."

The group have not decided yet on what their £25,000 prize will be used for but have mentioned sorting out issues with their studio spaces. After they were nominated for the prize, they learned that the building that currently houses their studio in Belfast has been sold and they were expected to be out within 18 months. They say it’s a result of “terrible town-planning and capitalism gone mad”, with many buildings in Belfast’s city centre standing empty due to pointless rent rises.

The group are the first Northern Irish artists to ever win the award. Millar said, "We are so proud to be from Belfast, to be of Belfast and the communities we work with.

"The síbín was for everyone of Belfast but it's also for all the collectives in this room. We see you, we support you. We're with you." 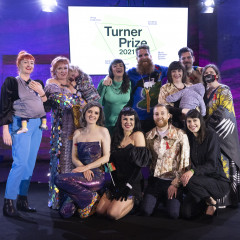