With Keir Starmer unable to respond to budget statements due to testing positive for Covid, shadow chancellor Rachel Reeves has taken his place to reply to Rishi Sunak.

Reeves accused the Conservatives of demanding that people “pay more for less”. She stated that this was because of “three simple reasons: economic mismanagement, an unfair tax system, and wasteful spending.

“Each of these problems is down to 11 years of Conservative failure. They shake their heads, but the cuts to our public services have cut them to the bone.

“And while the chancellor and prime minister like to pretend that they’re different, this Budget today will only make things worse.”

She accused the government of instead allocating funding to “cronyism and vanity projects”, saying: “We’ve had £37bn for a test and trace system that the spending watchdog says treats taxpayers like an ATM cash machine, a yacht for ministers, a fancy paint job for the prime minister’s plane, and a TV studio for Conservative Party broadcasts which seems to have morphed into the world’s most expensive home cinema.”

The Conservatives’ taxation decisions also came under fire from Reeves, as she targeted the party’s decision to tax lower income people to a disproportionate degree. Reeves said: “The highest sustained tax burden in peace time. And who is going to pay for it? It is not international giants like Amazon, no, the chancellor has found a tax deduction for them. 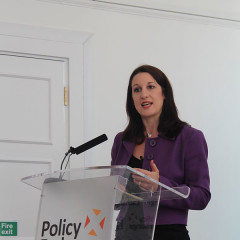