The High Court has ruled that there is a case for legal action against ministers for the use of non-transparent means of communication which are then hard – if not impossible – to be scrutinised by committees or freedom of information requests.

The non-profit legal campaign group Good Law Project object to the use of apps like WhatsApp as tools for discussing government business due to the lack of transparency that comes from private messaging. They have petitioned the High Court to allow them to take the matter to court, receiving approval during a hearing on 25 October.

The issue largely stems from the lack of in-depth policy surrounding the deployment of third-party apps in minister to minister communication. Messages on these apps will not become public record, and often automatically delete after a period of time. The guidelines that are in place have been argued by Good Law Project to be sparse, and often all too easy to ignore. With the court case, they hope to be able to review the relevant policies and force through effective changes to tighten up restrictions.

Arguing against the need for changes, a spokesperson for the government said that: "Ministers will use a range of modern forms of communication for discussions, in line with legislative requirements, and taking into account government guidance."

The general argument is that government reps will only use the channels to discuss minor issues or general administrative details. However, Good Law Project has uncovered evidence that apps like WhatsApp have been used to consider critical issues like Covid deaths in care homes and the awarding of lucrative contracts.

“Conducting Government business outside of official channels flies in the face of Ministers’ legal obligations to preserve official records about key decisions, and severely undermines their ability to comply with the Freedom of Information Act and duty of transparency to the Courts.

“How can anyone be certain that critical information is not being lost, or even deleted? Government has been evasive for months, but now we’ve been given the green light on all grounds, we will make sure they cannot shy away from the spotlight.”

The key to this issue is accountability. If ministers are given too much freedom to use private messaging, even if it is initially for trivial matters, the ability to keep key discussions away from public oversight becomes too great. Good Law Project has a history of pushing for more governmental oversight. They were the ones who proved that Michael Gove broke the law by giving a contract to a communications agency that was led by associates of his and Dominic Cummings. 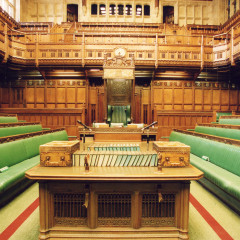