The government has promised to introduce legal obligations for water companies to reduce their sewage output into the country’s rivers and seas.

The government has promised that it will introduce legal duties for water companies to reduce their sewage output after outcry from MPs and the public. The idea was originally introduced as an amendment to the Environmental Bill in order to tackle sewage leaks, but was voted down in parliament. However, backlash has forced the government to make a partial U-turn.

The amendment to the Environmental Bill was proposed last week and was voted down 268 to 204. The amendment sought to make it a legal obligation for water companies to seriously reduce the amount of raw sewage they dump into the country’s seas and rivers, and to be able to demonstrate subsequent harm reduction. However, after the move was voted down, several MPs and the public protested the move, forcing the government to reconsider.

On Tuesday, the Department for Environment, Food and Rural Affairs (Defra) announced that the Environmental Bill "will be further strengthened with an amendment that will see a duty enshrined in law to ensure water companies secure a progressive reduction in the adverse impacts of discharges from storm overflows". This change will likely be welcomed by many, but some may question why an uproar was needed in order to cause such a change.

Labour’s shadow environment secretary, Luke Pollard, said: "It should not have taken a public outcry for this government to take the scandal of raw sewage being discharged into our rivers seriously.”

He added, "Having spent the past few days defending their position, this screeching U-turn will do little to convince the public that the health of our rivers, rather than the health of Conservative polling, is at the forefront of ministers' minds.

"The government still has no clear plan and no grip on the issue of raw sewage being pumped into our seas and rivers."

Some have also questioned why taxpayers will be footing the bill for tackling the issue of sewage spills. On Tuesday, a Downing Street spokesperson admitted that "the current failure of water companies to adequately reduce sewage discharges is unacceptable" but said that initial assessments for the costs of fixing the infrastructure "are over £150bn".

Hugo Tagholm, the chief executive of Surfers Against Sewage, has questioned why water companies aren’t being held responsible for the damage they themselves have caused, saying: “We believe the water companies need to cut into dividends they make every year to restore our rivers and our coastlines.” He added: "They haven't got a right to destroy these spaces and need to take the ambitious steps to restore them and we need to make sure the industry is not putting their profits ahead of making our spaces safe.”

The current water infrastructure in the UK is failing to keep up with the demand placed on it by the effects of climate change. During heavy rainfall, water companies have been releasing raw sewage into the UK’s waterways in order to prevent sewers from overflowing, but increased heavy rainfall has worsened the issue, with water companies more and more frequently relying on sewage output.

The Environment Agency has said that there were 403,171 instances of sewage outfall during 2020 in England alone. This resulted in raw sewage being released into rivers and seas for over 3 million hours in the space of the year. 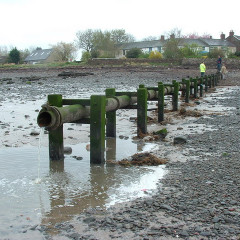 The government has promised to introduce legal obligations for water companies to reduce their sewage output into the country’s rivers and seas.