Representatives of the climate change organisation gathered in three locations to block traffic, supergluing themselves to the road and to each other.

Approximately 60 protesters from Insulate Britain took to the roads of east London this morning after a ten-day period of inactivity in order to continue their campaign for immediate climate change action. They targeted Southwark Bridge, Bishopsgate, and the Limehouse Causeway. The locations had the combined benefit of high traffic flow whilst not being covered by High Court injunctions, which allows the protesters to avoid more serious charges.

Police have arrested 53 participants in the protest. They forcefully removed them from the roads after they had superglued their hands, and in several instances, their face, to the surface of the road. This tactic is commonly used in order to frustrate efforts by the police to shift them.

The Insulate Britain representatives handed out notes to halted drivers that read: "Dear driver, we are peaceful and non-violent. We are sorry to delay your journey. For your safety please stay in your vehicle and do not drive on the hard shoulder. This is for emergency vehicles. The police are on their way. They will arrest us and you will be able to continue your journey."

This is the 14th example of roads being blocked by Insulate Britain since they began their campaign. For 14 days over a five week spate, ending on 14 October, the group took to major routes around Britain and delayed traffic, leading to hundreds of arrests.

Insulate Britain, an offshoot of Extinction Rebellion, aim to force the UK government to insulate all homes by 2030, which would have a substantial impact on the UK's carbon emissions. Some criticise them for causing disruption to ordinary people, others praise them for putting pressure on the UK government.

A spokesperson for the organisation, Liam Norton, said: “We know that the public is frustrated and annoyed at the disruption we have caused. They should know that one way or another this country will have to stop emitting carbon.

“We can do that now in an orderly, planned way, insulating homes and preventing thousands of deaths from fuel poverty or we can wait until millions have lost their homes and are fighting for water or starving to death.”

In another statement, Insulate Britain said: "We won't stand by while the government kills our kids."

There was a mixed response from the blocked drivers, with a large number shouting that "we're just trying to get to our jobs", whilst one refused to stop altogether and inched along the tarmac until he exited his vehicle and removed the protester in front of it from his path.

Others approached the protesters to say they were "doing a good job".

Consequences for traffic disruption are looking to become more severe, with Traffic Secretary Grant Shapps announcing that the government is planning on taking some of the members to court. 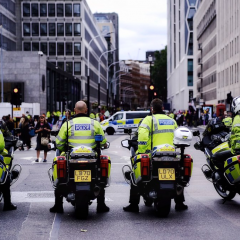 Representatives of the climate change organisation gathered in three locations to block traffic, supergluing themselves to the road and to each other.