The media’s focus on the MP’s alleged killer as an ‘Islamist’ and ‘of Somali origin’ could provoke a rise in hate crimes, some fear.

The UK’s leading Muslim organisation, the Muslim Council of Britain (MCB), are set to share updated safety guidance for individuals and mosques, especially for British Somalis, in expectation of a rise in Islamophobia and hate crimes following the killing of MP David Amess. A man named Ali Harbi Ali has been arrested on suspicion of being Amess’s killer, and early into the investigation was labelled as an ‘Islamist extremist’, ‘of Somali origin’, and ‘of African appearance’, which many worry will provoke a rise in Islamophobic and racist hate crimes.

Secretary general of MCB, Zara Mohammed, has made clear that the Muslim community do not support the actions of Ali, saying, “This is a heinous crime and we utterly condemn it”. She added, “Nobody in the local Muslim community could believe how anybody could brutally murder anyone, never mind Sir David, who was so engaged with them.”

Mohammed has expressed that there is “definitely an apprehension for Muslim communities at this time”, noting that there have been threats made against British Somalis since the arrest, especially towards “visibly Muslim Somali women”. She added that “our own social media has been rife with hatred,” after MCB released statements in support of Amess and offering condolences to his family.

The new guidance that the MCB are compiling will include advice on reporting hate crimes and will be shared in part via WhatsApp, with a Somali translation available. The organisation will also offer updated guidance for mosques, “reminding them of simple things like making a risk assessment, ensuring CCTV are fully functional and working with local communities and friends”.

Director of the Council of Somali Organisations, Kahiye Alim, is also concerned about a rise in hate crimes, saying, “we are preparing material for community safety and personal safety on how to report hate crime”. A London based member of the organisation received a death threat on Friday. Alim expressed that “we are concerned the [sic] way this story has been running”, regarding the media’s focus on Ali’s ethnicity and family background.

In a since deleted tweet another user said: “Journalists and broadcasters should know by this point that in the immediate aftermath of these attacks, descriptors shape the dominant narrative, and that there is ample evidence that this has material effects – usually in the form of violence.”

Another tweet highlighted the dangers of labelling the attack as “Islamist”, saying: “‘Islamist’ should never have been allowed as terminology for extremist oppressive fundamentalism. It allows for the interchangeable use of Islamist, Islamic, and Muslim, by Islamophobes and racists posturing as reasonable white moderates.”

Currently details of Ali’s motivations have not been clarified, but he is currently being held under the Terrorism Act. 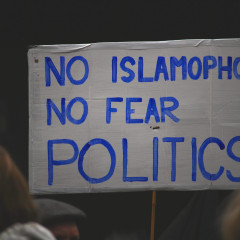 The media’s focus on the MP’s alleged killer as an ‘Islamist’ and ‘of Somali origin’ could provoke a rise in hate crimes, some fear.