Homophobic hate crime reports have risen by 210% and transphobic hate crimes by 332% in the last six years. These statistics have been determined from data collected from police forces via freedom of information requests by VICE World News.

The data obtained by VICE World News was through freedom of information requests to police forces across the UK regarding reports from 2014 to 2021. Of the total 45 UK forces, Hampshire and West Mercia were the only constabularies that failed to respond.

2014 was marked as a significant year in LGBTQ history, with sex marriage being legalised, and Europe’s largest LGBTQ charity, Stonewall, beginning to campaign for trans rights. Stonewall’s support of the trans community has been targeted recently, with companies including Ofcom pulling out of the charity’s Diversity Champion scheme, citing a “need to remain impartial and independent at all times” as justification for being unwilling to openly support trans equality.

Some police forces have claimed increases in reports are the result of people feeling more comfortable about coming forward, and a spokesperson for the Home Office has agreed, saying, “increases in police recorded hate crime have been partly driven by general improvements in crime recording, better identification of what constitutes a hate crime by the police, and more victims coming forward.” However, LGBTQ charities assure that the figures that have been revealed are “only the tip of the iceberg.”

Leni Morris, chief executive of Galop, a UK charity challenging anti-LGBTQ abuse, stated: “What we do know for sure, from the UK government’s own figures, is that 90% of hate crimes against LGBT+ people go unreported, so these figures only represent a tiny part of the overall amount of abuse and violence faced by the LGBT+ community in the UK today.”

She also commented on anti-LGBTQ hate crimes continuing to rise despite the pandemic, saying it did not surprise her. “We saw LGBT+ people targeted as a direct result of the pandemic – either because the pandemic was seen as a punishment for our existence, or because of our community’s association with the HIV/AIDS pandemic, and a notion that LGBT+ people were somehow at the root of this pandemic”, she said.

Stonewall’s Associate Director of Communications and Campaigns, Sasha Misra, has called for more to be done to protect LGBTQ communities, saying: “These deeply concerning statistics must be a wake up call that we need to do more to tackle rising hate against lesbian, gay, bi, trans and queer people. It’s worrying to see such a stark increase in reports of hate crimes, especially during a pandemic which caused so many of us to live through multiple lockdowns. This can’t continue. As a society, we all need to do more to combat anti-LGBTQ+ violence and call out abuse, harassment and anti-LGBTQ+ sentiment wherever we see it.” 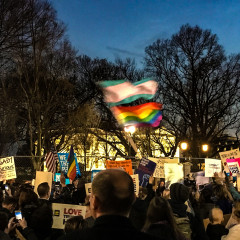