Cityread kicks off this Wednesday - a month long initiative to get London reading the same book. This year, it's Ben Aaronovitch's River's of London. We caught up with the writer to find out about the highs and lows of his job...

When did you decide you wanted to be a writer?

Quite early on when I realised that I didn't have a talent for anything else. Plus, I hate work, physical exertion, mental effort and having to do what other people tell me. As a career writing pretty much side steps all those things.

Did you immediately know that writing was going to be a workable career choice?

Yes, but that's only because I was too ignorant to know better.

What does a typical day of work involve for you?

I get up at six o'clock in the winter, earlier in the summer, which allows me to get a good 2-3 hours of procrastination in and still start work before nine o'clock. I work sporadically through the day until about seven in the evening at which point I stop pretending and just watch TV, or surf the net, or read a book.

How long do you tend to spend writing a book, and do you have a particular process to planning and writing?

The process usually goes thusly; I sit down with my editor and discuss possible deadlines, taking into account production lead times and potential publication dates. Once a date is agreed I then procrastinate until a couple of months before the deadline and then I panic and write like crazy.

How did you get involved with Cityread?

My publisher volunteered me. They said they were putting Rivers of London up for contention and I said that they'd never choose an SF book, except they did. I think it's a brilliant event and deserves to be much better known - I'm hoping that with each year it will get to grow in popularity.

What were the main inspirations behind Rivers of London?

I wanted to do a police procedural, where the detectives deal with the supernatural in a sort of workaday manner. You know - 'Oh god, not vampires again.' Where our heroes have to worry about paperwork and the European Convention on Human Rights and whether they can gather enough evidence to persuade the CPS to prosecute.

Do you feel like fewer people are reading novels now, or is this a myth?

I don't know, I think it's a myth. My son and his friends read and/or don't read at about the same proportions as me and mine did.

Do you have any advice for young writers?

The only way to get good at writing is to write, don't be scared to write fanfic or hugely derivative works if that's what gets you started. If you write enough, you will find your own voice quickly enough. The key skills to learn are - finish what you start and at least try to hit your deadlines.

The PC Grant books by Ben Aaronovitch are published by Gollancz and are available now.
Cityread will be running a series of events throughout April. To find out more, click here.

Have you got what it takes to be a writer? Check out Creative Choices, a website filled with arts careers advice, and the profile here 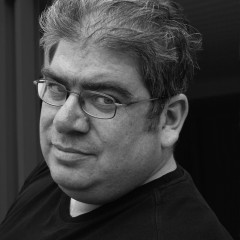 Cityread kicks off this Wednesday - a month long initiative to get London reading the same book. This year, it's Ben Aaronovitch's River's of London. We caught up with the writer to find out about the highs and lows of his job...