Marco Kesseler is a documentary photographer, travelling to countries such as the Balkans, Ukraine and the Middle East to highlight political issues and document social changes. We found out how he operates...

When did you realise that you wanted to be a photographer?

I was brought up surrounded by art from a young age; both of my parents are artists and photography played an important role in our family life, so it wasn't as much of a decision to become a photographer, but more of a natural progression that has, and continues to evolve over time. I suppose that one of the key points to the direction I wanted to take was later as a teenager when I started to appreciate the role of narrative through photography.

What is a typical working day like for you?

I'm still not completely sure if there is a typical day! One day you can be photographing athletes and the next be living with families in the Albanian mountains. Generally though, a lot more time is spent sat at a computer; scanning film, editing photos, researching stories, clients or funding so its not always as interesting as it might seem.

How important is photography in bringing political messages to public attention?

I think it's hugely significant, but not always positive. Looking at wars from the past 100-150 years, history is scattered with different examples where photography was either used for propaganda or to push a political agenda; throughout the first World War (and for a couple of years in World War II) the American Government completely prohibited the publication of images showing American casualties. A more recent example would be looking at the effect of The Islamic State's photographic media strategy, both in its shock tactics and in its approach to inspire people to join them. (you can read more about that here: http://www.aperture.org/blog/the-islamic-state-and-photography/).

On the flip side though photography can raise awareness to political issues and equally important be used as a way of recording events. Take for example Simon Roberts' Election Project which acts as a topographical record of the British political climate during the previous election campaign.

Do you think that words or images have a stronger effect on public feeling?

I think it depends on the context of the work as much as the individual who is looking at it. Personally, I feel that the one reinforces the other and helps to give more of an understanding.

What are the biggest challenges of your job?

It really varies but I'd say the most difficult period was when I was first starting out after finishing university. There were no set briefs or rules and you have to start building a contact / client base from scratch.

Using photography as a legitimate excuse to go anywhere, get to know anyone and be allowed into their lives, even if only for a short time.

What advice would you give to others who were looking to get into documentary photography?

I am quite a quiet person and so I guess this comes from personal experiences when I was first starting where I let things pass. Don't be shy, if you don't ask, you wont get. Whether it is asking to take someone's portrait, looking for advice, work or whatever, the worst that will happen is you are met with a 'no' and then you try again.

Main image: Marco Kesseler, from This Land of Ours That is Not Ours - still from clashes in Kiev between Euromaidan Protest Movement and Yanukovych's Government Forces.

Have you got what it takes to be a Photographer? Check out the career profile on Creative Choices, a website filled with careers advice in the arts. 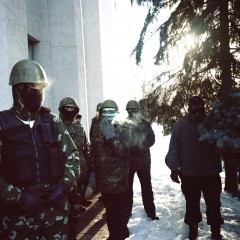 Marco Kesseler is a documentary photographer, travelling to countries such as the Balkans, Ukraine and the Middle East to highlight political issues and document social changes. We found out how he operates...