Voice MagInterviewsWant my job? With fi…

"Seeing it happen, come together and creating a story out of nothing with the limited resources, it’s like performing magic..."

My name is Idriss Assoumanou, and I’m a filmmaker based in Birmingham.

What does your job involve? What happens on a typical day on set (or off of it)?

So my job involves organising, filming, directing and editing films and other various projects and contents. I’ve been shooting actors scene reels for the last two years to showcase their talents and add to their showreels.

On a typical shooting day, I’d go out on location to shoot a scene for a few hours and then return to load the footage and start editing. On other days, I’ll be catching up on any editing or meeting with people to talk about the next projects.

What’s great about what you do?

For me, it’s being on set. Seeing it happen, come together and creating a story out of nothing with the limited resources, it’s like performing magic, you’re cheating and telling the audience this is real, but there’s meaning behind it.

What are the toughest parts of your job?

Staying patient, calm and motivated. Having periods where there’s no work or projects can sometimes make you feel like you’ve hit your limit. There have been times when I’ve doubted myself and the path I’ve taken, and I’ve had to learn to get used to that dip when it comes by trying to remember to stay motivated, which in itself is very hard to do (for me anyway).

Finding funding is also very tough because you have to convince people to give you money so that you can create your art. Harnessing this skill is very difficult for me to do. Being a non-native English speaker, I’ve never been confident with my vocabulary or speaking, and I find it hard to find the words to convince or explain why I need money to make my films.

Another challenge of this is how the system is slightly rigged to give others more of an advantage, and it’s still a hurdle I’m learning to get over.

I recently won an award for Best Director at the Midlands Movie Awards that I, unfortunately, couldn’t attend. I’ve also released my film ‘PATRIOT’, which has been well-received, and for the first time was hired to direct a short film in September.

These last few weeks have been quite overwhelming to be honest, I always thought it couldn’t get any better than going to the Cannes Film Festival, but I still get people congratulating me and praising me for my award, which is still weird for me.

What was your career path into this job?  Have you also worked outside of the arts?

So, when I was in school, I wanted to be an actor. I really loved drama and thought I could pursue it as a career, but I didn’t have a great experience at college, which put me off. But luckily, I still had an interest in media and did my Arts Award in filmmaking and there found my passion.

From the moment I chose to study it at university, I told myself that I’d make a career from it. So for the three years, I’ve studied, practised, learned and went out to get experience working for people, creating content and doing music videos for local artists. When I graduated, I had a network of people and organisations I could work for. The first job I was hired for was for the BFI Academy in Birmingham as a film assist coordinator. I would help and mentor some of the students with their projects, where I also met other professional filmmakers I could connect with.

Since then, I’ve been delivering workshops in filmmaking, creating content and making films. But it’s taking a few years of experiencing and doing a lot for me to know exactly what I wanted to do, which was directing films and the journey to do so is still ongoing.

What’s been the biggest challenge so far in your career? How did you overcome it?

To be very honest, this is a hard question to answer because either I can’t think if any moment or because everything has felt very challenging in my career. On the one hand, I could say meeting my own expectations without the knowledge or resources to achieve them.

Making enough money from what I’m doing has been a challenge to overcome, and making sure I’m working regularly enough to earn a living without working a 9-5. But I’ll settle with trying to figure out how to make it into the industry in the position I’m in without the help, resources, knowledge and time needed to do so. I say that because as time passes, things always go through cycles of change, and you never really know when the time for you to catch an opportunity may come, or even how to at times. I count myself lucky to have made it this far; even after winning an award, I still feel there’s so much more I could do that still needs to be done.

Have you noticed any changes in the industry in recent times? If so, what?

Yes, I believe the way people consume content has changed and influenced the way people make films. Ten years ago, it was the boom of content making when professional quality cameras were cheap and accessible to everyone, so everyone was doing it. Now, more and more new platforms are popping up outside of typical platforms like YouTube, traditional television and even Netflix. Groups and companies are starting to create their own platforms and put their own content on them.

When I released ‘Out on the Field’, I put it on Vimeo, YouTube and Instagram, and for a short film, just over 5 minutes, it did better on Instagram in a short space of time than all of my other films combined. So it shows how different platforms affect the success and exposure of a film.

There’s also a slow rise in diverse filmmakers, so people will be putting more money into them soon enough.

Do you have any advice for young people interested in your field?

Typically people say go out there and get started early, but this has been said too many times. So my advice to a young person is if you truly want to make a career in this field, you must be kind, calm and patient. Those three characteristics will guarantee you get called back on another project and help you build stronger networks. And also be willing and eager to try and learn.

Learn the role of every department and what job they do. From sound recording to costume and set designing, learn everything and do every job available. Those skills will teach and help you develop your workflow and understanding of what it takes to make a film and teach you the value of each one. 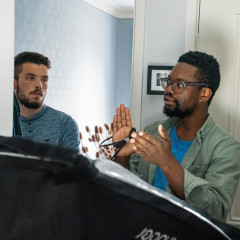 "Seeing it happen, come together and creating a story out of nothing with the limited resources, it’s like performing magic..."