What has been the reception of the event from those taking part?

Everyone that has taken part in the project so far has really enjoyed the experience. Perhaps partly because singing or making music for a cause has a different feel to singing or playing for fun; and when we start talking to people about the fact that Scotland is hosting something as big and important as the UN global Climate Summit, we find people are totally up for doing something focused on that. But also, community groups, choirs, schools, nurseries, musicians – all have been restricted in their creativity and music making for the past 18 months – and this project offers an exciting focus when coming back to singing or playing music together again.

What is the overall aim of the event?

Let it Grow aims to create a wave of grassroots music making and creativity in the weeks leading up to COP26 – the UN Global Climate Summit. It was conceived as an online project – sharing music, words and messages on social media using the hashtag #MusicforCOP26 – making it both lockdown-proof and internationally accessible. We are also hoping to bring a large-scale live performance of our piece Enough is Enough to Glasgow during COP26, with 150 performers from all walks of life. Essentially, we aim to make so much noise it’s impossible for world leaders to ignore!

However, we need help in spreading the word to achieve this, and we hope anyone reading this will check out www.letitgrow.scot and share the open invitation far and wide – or make a clip to contribute to the online wave of music.

How far out have you managed to gain contributors from?

As part of Let it Grow, Oi Musica is supporting the creation of six new music videos spanning geographic locations and languages as well as a range of music genres: a Glasgow hip hop piece; a Ghanaian-Scottish collaboration, featuring the Ghana Police Brass Band; a French/Moroccan piece from musicians based in Brussels; a Cuban rumba piece in Spanish, and even a song from a Guaraní indigenous community in Brazil. We are also producing a collaborative music video involving 200 young people from 6 youth carnival bands across the UK – including London, Manchester, County Durham, Edinburgh, and Glasgow.

These six videos are designed to involve lots of different ages and nationalities, as well as to inspire new creations from a wide range of people and places. Aside from these, we’ve had nearly 600 expressions of interest from musicians and groups from as far away as the USA, Latin America, Africa, Australia & New Zealand, and India. Whether these translate into music contributions before COP26 is hard to say – many countries are still battling COVID-19 or are in severe lockdowns where collective music making isn’t possible. However, it’s still amazing to think that the original song and the idea of expressing views, political or otherwise, though music has resonated with so many different people.

How did the idea for Enough is Enough come about?

The idea grew from discussions with the Wellbeing Economy Alliance (WEAll) in early 2020 about Oi Musica presenting an exciting programme of street bands in Glasgow, during COP’s original 2020 dates. When the pandemic hit, we were already in discussions with Edinburgh’s all-welcome Soundhouse Choir about presenting an epic large-scale piece for 100 singers, 50 brass players, and 30 drummers during COP in partnership with WEAll. It soon became clear that the idea couldn’t happen as a live performance though; and when COP26 was postponed for a year, we felt a strong conviction that artists' and musicians’ voices were all the more important in turning media and public attention back onto the growing climate emergency and urgent need for systems change.

We reimagined the project as a music video, and were delighted when Karine Polwart came on board as lead songwriter. Our aim was to compose a piece that was arresting in its opening bars, wasn’t afraid of evoking the raw grief of the climate crisis, but would leave audiences feeling hopeful and resolved that we still have time to make change collectively. We wanted the piece to be musically accessible for a wide range of abilities – singers, drummers and brass/wind players – thus creating something that could have a life of its own amongst community-based music ensembles beyond the life of our project. The piece is licensed via the Creative Commons, for sharing and collective benefit rather than for profit.

We expected the idea to really come into its own in Autumn 2021. But when we released Enough is Enough online in November 2020, during the week that COP should be in full swing, it achieved a viral reach far beyond our expectations – over 250K views across facebook & Youtube, quickly gathering over 500 sign ups to participate in something bigger for COP26 in 2021.

We are finding that take-up of the mass participation idea is quite slow, and a lot of that is due to the complexities that groups are grappling with in terms of getting back to delivery while COVID remains a global pandemic. In many ways it felt like a risk to plan a project like this when COVID continues to wreak havoc – but we definitely felt we would regret not trying the idea, particularly given the positive reaction that Enough is Enough received last year.

The impact of the pandemic has delayed the talks. Has it caused more interaction with the campaign?

The delay to COP has given us more time to pursue the idea of Let it Grow. Crucially though, it has enabled Oi Musica to reach out to a whole range of organisations that previously we had no connections with. So from that point of view, it has resulted in greater interaction with Let it Grow. It has also enabled us to broaden our network and be part of some interesting conversations about music, wellbeing, climate campaigning, and systems change. Oi Musica is a social enterprise, so any ideas that centre on wellbeing frameworks, non-profit ventures, and collective or community benefit are of real interest – whether music and creativity centred or not.

What can you say on the evolution of Enough is Enough, and what have been the most interesting renditions so far?

Although we know of 20 or 30 groups working on a rendition of the piece, or new music inspired by it, very few of these have been released yet! We have just created a Schools Pack, encouraging primary aged children to get involved in the idea and we’re excited about seeing some of those renditions – particularly if they are accompanied by artwork or mini projects on the oceans or forests.

In terms of the evolution of the music, I’m really interested to hear the Ghana Police Band playing the original brass arrangement! We’ve also heard from a couple of carnival music organisations in England who plan to collaborate on a piece using samba drums, percussion, and dance – I’m really excited to hear how that will differ from our youth carnival piece. There are so many directions you can take a piece of music in, it’s interesting to see how different musicians and players approach this.

Can you describe Saint Mungo and his legend? How does it relate to our climate crisis?

Saint Mungo, also known as Kentigern, is Glasgow’s patron Saint. The city’s motto “Let Glasgow Flourish” is emblazoned on Glasgow’s coat of arms, which depicts a tree, bird, fish, and bell – often alongside Saint Mungo himself. These emblems and symbols are connected to the legend and alleged miracles performed by Mungo. There’s an old bairn’s rhyme that goes:

The bird is the robin, which Mungo is said to have brought back to life and tamed after his classmates stoned it to death. It is beautifully represented in a city centre mural by the street artist SMUG. The tree, said to be a frozen hazel branch, was allegedly used by a young Mungo to rekindle the holy fire after it had been extinguished by his youthful peers. The bell may have been a gift from The Holy See, though no-one knows for sure where it came from or what happened to it. The fish was a salmon with a ring in its mouth. The tree represents both earth and fire, the bird represents air and the fish water. And the bell represents human spirit, as well as collective warning and action. The stories and legends of the COP26 host city provide themes that are both universal, and particular to Glasgow.

How can others get involved?

It’s as simple as making a phone clip of yourself singing part of the song or the whole thing. Or even creating your own song or spoken word for the climate crisis. Then, share your video online, tagging @LetitGrow_music and using the hashtag #MusicforCOP26! For inspiration, visit www.letitgrow.scot

Anything and everything is welcome! A few bars of ‘Enough is Enough’, strumming a few chords, speaking a few words. Anything that shares a message for world leaders – demonstrating the strength of public feeling and building public pressure in a fun and creative way. We can’t all take to the streets this November, so join us in making some noise online now!

Let it Grow invites anyone and everyone from all walks of life to share music, words, and other creative actions on social media in the weeks leading up to the UN climate summit, COP26. From carnival drummers in South London, youth bands in Manchester, and hip hop in Glasgow, to school groups learning about biodiversity. Anyone can join in! We believe that together we can intensify public pressure before world leaders arrive in Glasgow on 31 October. And have some creative fun in the process!

‘Enough is Enough’ was composed to inspire choirs, street bands and community groups to make music for change. It is licensed via the Creative Commons, allowing for adaptation and encouraging creativity from anyone that performs the music. We’d love to hear your version, or something new inspired by it! 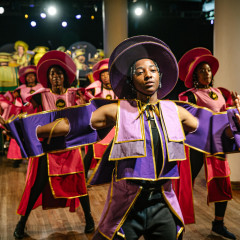 Interview: Oli Furness from Oi Musica on the Let It Grow Campaign