Deelight is one of three artists supported by this year’s Creative Talent Programme.

How would you describe your work to anyone unfamiliar with it?

My name is Jordy Deelight, the real housewife of Leith and Drag’s answer to Angel Delight on an Aldi budget.

I am an Edinburgh-based non-binary drag artist from Leith, who works between Edinburgh and Glasgow creating performance-based work for theatre and television. My work looks at identity and persona in the art of drag, exploring themes of disability, gender and mental health in autobiographical theatre and auto theory-based work. My aim in my work is to bring conversations about the deep-rooted psychology of humans and how they think, feel and act.

How important is the kind of support provided by Creative Youth?

I feel like the support right now during this ongoing pandemic has been incredible and a relief as an artist. Being of high risk, having cystic fibrosis, there has been a level of anxiety with returning to live performance. Having the ability to work remotely and create a movie with Creative Youth has ensured my mental health isn’t under a huge pressure, and has given me the chance to network my work in London and explore documentary work.

What have been your experiences with trying to access support in the arts before?

As someone who is working class, disabled and non-binary, it is a very difficult process to ensure freelance work. I have been very fortunate to work with the National Theatre of Scotland and the BBC, and now being able to add Creative Youth to that mix will help me nurture my talents and work as an artist with the mentoring of other experienced professionals.

What part of the Creative Talent Programme are you most looking forward to having access to and why?

I am looking most forward to the mentoring and professional guidance of a mentor. I am just coming into my work and professional career, and film wasn’t what I trained in, but had to do in order to survive during the pandemic. Having a mentor supporting me will allow me to try out new methods of working and reach my potential.

If you’re able to say currently, what are your plans for the work you are going to create during your time with the programme?

I’m very excited to be developing a documentary called Team Spirit, which will look at the question: do LGBT voices belong in football.

It was inspired by the miniseries I have been doing with the BBC social, called Jordy’s Big QUEER AGENDA, after I did a footballer look in drag. I have so many friends that are queer who love football and the community aspect of it. I felt it was ignorant of me to judge why, so instead I want to ask why. What is it that draws people to sports like football,  and do LGBT voices feel a part of the football community? I’ll be working with a local LGBT inclusive football team in Edinburgh, two other queer artists who engage with sports and developing a script and film.

Do you have any plans for after you’ve finished the programme/your career moving onwards?

Ideally I’d like to take the seed of the idea and pitch it to television organisations so it can reach a wider audience. I feel a drag queen has never done anything like this as a presenter and it could help educate straight audiences on queer issues.

I also have plans to start working more in London – I’m potentially making a move from Edinburgh to London in the next year. I’ve also been finishing my first autobiographical book called Wasted Youth, which is based off on my first solo show in 2019, and discusses my life of hardship and recovering from sexual assault.

Currently I am producing my first EP called Medicine for Life, that features 5 songs written by myself about my life during the pandemic.

I’d also ideally get on Ru Paul’s Drag Race UK and be the second Scottish queen to bring the crown home.

The Creative Talent Programme was launched by Creative Youth in 2009 to identify young and emerging artists and companies who have the potential to become excellent creative practitioners and give them the artistic, business and strategic support to become flourishing, challenging, exciting organisations of the future. 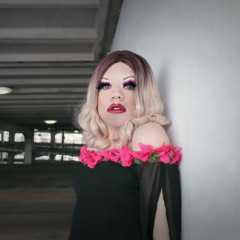 Deelight is one of three artists supported by this year’s Creative Talent Programme.