Skateboarding is more popular than ever lately, partly down to its inclusion in the Tokyo 2020 Olympics. We spoke to Liam Teague, a skater of 20 years and manager of BYC Skatepark, about skateboarding's culture and evolution, since he started out.

What sparked your early interest in skateboarding culture, what inspired it?

Mainly through taking up skating itself. I wasn’t too aware of skateboard culture before I started in 2001, besides playing the first THPS [Tony Hawk's Pro Skater] game on the Playstation. I guess that had an impact – the way skating was presented, with the videos of the pros, the cool music – it seemed pretty exciting as a 12 year old.

But when I started skating with friends and we discovered the videos, magazines, brands, clothes… skating seemed like its own universe and we wanted to identify with it and be a part of it. That was the main thing, it felt like this whole world and we were on the inside of it.

What is your opinion on skateboarding in the Olympics?

I’m not too fazed by it but it’s pretty early to tell at the moment. Lots of people think it’s going to have a huge impact but it’s only four days every four years, I’m not sure if it’s as big a deal as it seems to us looking at it from the inside. Like hasn’t everyone heard of skateboarding already? Who knows though.

Something interesting that was pointed out to me is that out of all the sports showcased at the Olympics, skating is one of the most accessible. You don’t need to find some club to join or pay for someone to coach you. It’s one of the only ones that can be done purely in public spaces. So if people are inspired to take up a sport maybe skating will be a first choice for a lot of them. There's an attraction in that it’s a sport that doesn’t come with an aim of competing or taking it somewhere, you can just go and do what you want with it.

That’s something that a lot of people don’t seem to be able to get their head around. Like, no, we’re not all out here training to enter competitions or try and “make it” in skating, we’re just having fun and challenging ourselves. I don’t think the Olympics is going to help people understand that better but who cares.

I think it will do a lot for women’s participation though. Skating’s been very male dominated up until the last few years. The women’s skate scene is still in its infancy which I think was shown by the young age of a lot of the female participants at the games. It’s going to do a lot for the visibility of women in skating, showcasing their amazing talent to the world and the standard is going to excel over the next few years.

The Olympics is such a small part of everything that happens in skateboarding. So it might get more people on a board but if they stick at it they’ll quickly discover a lot more they like about skating, and the Games will carry on being something that happens in the background.

What can you say about skateboarding's influence on wider media, such as art, videos and music?

It always seems to have an influence that reaches outside of skaters. When I was younger the skater “look” was pretty strong, and a lot of people wanted to copy or buy into it. It was a whole subculture amongst teens with the skate shoes, oversized hoodies, nu-metal music, Jackass on TV. The older guys probably thought we were clowns but we had our thing and a lot of people who didn’t skate wanted to join in. You’d see skating in music videos and in adverts, companies were definitely trying to cash in on it all.

It seems over the last decade or so, people defining themselves by how they dress has become less of a thing overall, and skating kind of went the same way. It went from people borrowing from skate culture to the other way around. I think skating kind of lost its identity for a minute when big brands like Nike and Adidas came in and skaters didn’t necessarily want to ‘identify’ as such so strongly.

But now it seems to be going back the other way. There’s more of a commonality amongst skaters than before, and skating as a culture is getting leached off of more than ever. Now pros are scoring car deals, watch sponsorships, starring in ads for condoms – all sorts of nonsense. I don’t really get what these companies are thinking some of the time, but good on the guys for getting paid I guess, even though it seems pretty lame at times.

Thoughts on inclusivity of skateboarding culture?

Let me preface this by saying that I do think skating is overall a pretty welcoming activity. I think people can find a place within skating and feel comfortable easier than they could in a lot of other activities. But I don’t think skateboarding is as inclusive as it claims to be.

You’ll often hear skaters parrot on about how inclusive skateboarding is – but it feels like it’s kind of this badge that we've just given ourselves as a culture, without putting in much effort to uphold those values. We have inclusivity forced upon us to some extent. We don't get to choose who we share a skatepark with, we have people representing our sport at a professional level from different ethnicities and backgrounds that we don't choose, and are fans of them from a distance based on what they do on a skateboard.

Over the last year there’s been the BLM movement, as well as some pro skaters being called out for incidents of sexual assault or racism. Discussions around gender identity have also been prominent. What it showed to me was a lot of skaters aren’t ready to have these conversations, and the idea of inclusivity kind of falls apart. There's a lot of (often wilful) ignorance in skateboarding.

The idea that nothing matters as long as you skate is what's holding us back, it's dismissive of people's struggles and viewpoints. When someone says "It doesn't matter who you are, skaters accept anyone if you’re down to skate that’s all that matters" what you’re really hearing is  "I'm going to be friendly to you because you skate, but don't voice your problems to me, I don't want to think that they're an issue."

Some companies and pros voiced their support online of the fight against racism over the last year and so many comments from skaters read “why are you even talking about this, racism isn’t a problem in skating”. It’s an easy way to wipe your hands of it and tell yourself you’ve done all you need to do.

Don't get me wrong there's a lot of genuineness in the culture, I'm not trying to paint everyone in that light. I think we as a whole do a lot better than many other subcultures. But I'm not interested in everyone else, they don't affect us and they don't affect how someone from a marginalised group will feel if they have a hard time at the hands of skaters. We need to stop the "I only see another skater" act and actually take active steps to make that the case.

How do you think skateboarding will be viewed in years to come?

I have no idea. In the time I’ve skated it’s gone from being viewed by adults largely as something for kids that wanted to laze around and damage stuff, to a healthy, challenging and productive activity that anyone can do. Of course it was always the latter but it took a long time for people to stop laughing at us in the street and take us seriously.

It probably won’t change much from how it’s viewed now. Skating’s everywhere, there’s a park in every town, it’s starting to be taught in schools. It’s visible. I don’t see that going away. Maybe with the Olympics more people will come in from the outside and try to make it more “regulated” and try to provide opportunities for kids to take it up with the goal of being an Olympic athlete, but I don’t know how far they’ll get to be honest.

You’re falling about on the floor flipping a piece of wood around with your friends at the end of the day. Kids are always going to get drawn to that aspect of it more than some washed up gymnastics teacher shouting at them to do 10 more kickflips. 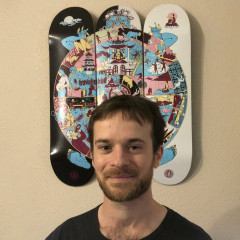 Skateboarding is more popular than ever lately, partly down to its inclusion in the Tokyo 2020 Olympics. We spoke to Liam Teague, a skater of 20 years and manager of BYC Skatepark, about skateboarding's culture and evolution, since he started out.