We speak to the award-winning playwright and New Creative participant about his audio drama Love Beyond the Zoo, which boldly asks 'What is love?'

Where did the idea for Love Beyond the Zoo come from?

The first line appeared in my head, and then I seemed to be writing a love story between someone and an elephant. What could be more natural than that?

I was going from work to an event (three trains, ugh), and as I sat down on the train something came into my head and I had to start writing. I had to keep pursuing it while it was there – sometimes ideas disappear if you wave at them but don’t invite them in to sit down. I wrote for the whole journey, and at the event I, slightly rudely, tried to ignore people and keep writing it.

For all the good the piece has done me, it’s done irreparable harm to my social life.

In terms of your creative process, how do you get from a vague idea to a full-blown narrative?

Every project is different – I think each project demands its own process and comes from that. Sometimes I think of it as a bit like tuning an old school radio – I start with a line or a voice and try to find the right frequency/story that makes sense of the rest.

So I usually start with a line or a voice, and then work out who it belongs to, or what’s happening. Sometimes I talk about that as hearing voices, and strangely enough the first line of Love Beyond the Zoo is a line from my first play, I Dare You. The first line from The Silence and the Noise, which was one of the 2021 Papatango Prize winners, is also a line from I Dare You. Maybe what I’m saying is that I’m haunted by brilliant actors that I’ve worked with.

What other artists inspire you, both in general and for Love Beyond the Zoo specifically?

I’m in awe of Michaela Coel and I May Destroy You, still, and I never miss a play by Lucy Prebble or Mark O’Rowe.

For Love Beyond the Zoo, it’s a bit of a strange one as so much of the process was instinctive. I think it drew on a lot of stuff that snuck in as a child – all the Roald Dahl, Michael Rosen, Spike Milligan – and that’s been gently festering in there for a while now.

A lot of my friends are writers who I know from different groups and schemes, for theatre and for TV. They’re my biggest ongoing inspiration.

Love Beyond the Zoo takes an unusual approach to its themes of love and escaping oneself, what benefit do you feel there is to using the surreal to explore the real?

Whether we’re talking real/surreal or real/imaginary/symbolic, a feeling I’ve had in a lot of my work is – why privilege one over the other?

I guess what I mean is – Love Beyond the Zoo is a true story. It’s just not literally true.

With some other stuff I’ve done, I’ve been into the idea of ‘psychological realism’ – writing something as it feels, rather than the literal facts of what happened. This is a little easier when writing characters who are young (audiences accept the imaginary/symbolic more easily there I think, as it’s closer to how we think they see the world) or in monologues (as they put you behind the eyes of a specific character).

How was it being part of New Creatives, did you feel supported?

In several words – most of the process happened during the first lockdown, and it was honestly really brilliant to have something to engage my brain with during that period of time. I had a brilliant director (Anna Campbell) and sound designer (Madison Willing), and the scheme offered lots of marketing and other advice (thanks Rural Media’s Elle Adams) which blew my mind.

Your previous play, Little Echoes, also consisted mostly of monologue, and The Silence and The Noise is an audio play. What draws you to this format?

I think they’re different – Little Echoes is three interlocking monologues with sections of dialogue and (spoilers) some actual scenes. The Silence and the Noise was written for stage, and I’ve loved adapting it for audio, but it is pure dialogue.

I’m most excited about monologue when a character is delusional/has a different sense of reality to the audience’s understanding (Dark Vanilla Jungle by Phil Ridley was my first and most revelatory experience of this), and/or the character exists in strong tension with their world (Iphigenia in Splott by Gary Owen was a jaw-dropping example of this for me). Recently I’ve loved DESTINY by Florence Espeut-Nickless and Emma Dennis Edwards’ Funeral Flowers, and they both play with these things to an extent.

So I try to do that, really.

Are you currently working on any projects and can you tell us about them?

I’m about to go and record The Silence and the Noise for its audio tour, and I am literally the most excited man in the world about that. I’ve just finished writing an episode of EastEnders (my first), and I was an East End kid, at least for a bit, so that feels pretty good. And my Gran can watch it – she’s 91 and I think secretly thinks of herself as a real Pat Butcher

I am doing some other things, but nothing is really confirmed, so my fear is that if I mention them here they might evaporate.

What would you say to young people looking to get into the theatre industry?

For a long time I was quite resistant to advice. I wanted to forge my own path. Then, when I took advice, I’m not sure I took the best advice. So what I’m saying is I’m not sure I would take any advice from me. Maybe if it was specific stuff about writing a piece about someone in love with an animal. But then only maybe.

What I would say, I guess, is it’s all a bit easier when you’ve found friends who do it too – people you can commiserate with, who dissect work together, cheer each other on, and celebrate each other.

We also reviewed Love Beyond the Zoo, and you can read that here. 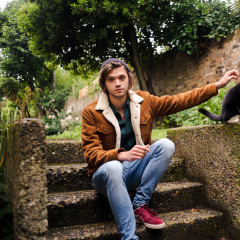 We speak to the award-winning playwright and New Creative participant about his audio drama Love Beyond the Zoo, which boldly asks 'What is love?'