12-year-old Affiyah Fayyaz tells us about the process of creating a magazine, their hopes for the future, and shares a simple message that we are all "amazing, unique, and beautiful, and there is nothing wrong with that".

Could you first tell us your name and age?

My name is Affiyah Fayyaz and I am 12 years old.

Tell us about ECS Empower?

ECS Empower is a magazine about the Black Lives Matter movement and why we think it is important, why black people are no different to white people and how we can help others.

Why did you decide to get involved in the magazine? What was your contribution?

I wanted to get involved in the magazine because I strongly believe in equality and respect, so I wanted to show people that being different doesn’t matter and you shouldn’t make anyone feel ashamed or bad about themself because of their race.

I was the Co-Writer and I took part by writing multiple pages and finding ways to make and create the magazine.

How did you find the process of creating your own magazine? What were some of the fun bits?

Creating the magazine was a first time experience, but it was fun. It helped us find ways to use our creativity to produce something that could change lives. To be honest, making the whole magazine was fun, it was an unforgettable experience, and knowing that the magazine will help change people’s lives made it even better.

And was there anything you found challenging?

It was hard to find ways we could help people because everyone has different experiences – how do you pick main points to talk about when there is so much to cover? We also had to think about how people could and would relate, so we had to make it very positive and helpful so the reader can feel as though they are not alone.

How do you feel conversations about race and racism have changed over the last year?

I feel as though people have begun to open up and talk about their personal experiences and people are paying a lot more attention to race and racism. Although I believe people should have started to talk about it earlier so it wouldn’t get worse, at least people have finally got to the point where they feel as though enough is enough and racism and discrimination should be stopped.

Do you feel hopeful that racism will one day no longer exist?

In the magazine I was really interested to read about dealing with racism in school, and that 80% of students polled had seen at least one racist incident. Is this an issue you feel is being dealt with appropriately? What more could be done to tackle it?

I don’t believe that it is being dealt with because people don’t know how to react when seeing these types of issues, so no-one talks about them. However, in ECS Empower we actually talk about this and we have written ways we can help when we see people in these types of situations. I think to help tackle it it should be taught about more as part of the school curriculum and it should be spoken about a lot more.

Are there any particular people, projects or initiatives that you think are doing good work in challenging racism at the moment?

I think that after the Black Lives Movement people have opened up about their experiences, which has benefited the situation by raising awareness. Also, a lot of  role models have opened up about their experiences. For example Leigh-Anne Pinnock made a documentary called Race, Pop and Power. The documentary was about her and her partner Andre Gray’s experiences about being black. This made a big difference because they both are such inspiring people with many fans who watched and supported the documentary – which then raised a lot of awareness.

What do you want to be when you get older?

I currently don’t know what I want to become in the future, but I certainly know that I want to be someone who can inspire millions of people and hopefully help to raise awareness and prevent any of these situations.

And, thinking broadly, what is your biggest hope for the future?

I just want to inspire millions of people to help them understand that they don’t need to feel bad about themselves because of others. Being different is a gift and you should never be ashamed of being who you are. Whoever you are, you are unique and amazing, and you don’t need society to tell you how you should look. No-one needs to look a certain way because nobody is perfect, and that is what is beautiful about us.

I would like to say that you should never be ashamed of who you are. You are amazing, unique and beautiful and there is nothing wrong with that. Never let society bring you down because we can be whatever we want. Also make sure you read ECS Empower because it can help you learn, understand and find ways you could play a part to stop racism.

Affiyah Fayyaz is a contributor to ECS Empower. To find out more about the magazine, and hear from other young people who worked on it, follow this link. 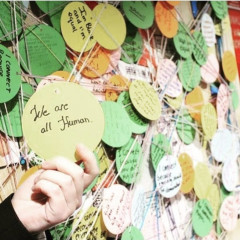 12-year-old Affiyah Fayyaz tells us about the process of creating a magazine, their hopes for the future, and shares a simple message that we are all "amazing, unique, and beautiful, and there is nothing wrong with that".