We speak to the 'first story metal’ band called  Pressure, to learn more about their unique sound, advice for up and coming artists and new music - Read on for more.

I am Olof, the lead singer and the messenger of the band. I have been singing in different rock bands for a long time but for the last three years I have been a been a member of this band. I have been singing for all my life but professionally I started a little later than most. First I actually wanted to learn how to play guitar and perhaps sing a couple of songs on a party or so, but soon found out that singing was my main instrument that I really could stand out and express myself!

The band are called Pressure, a Story Metal band from Stockholm, Sweden! We are a three very dedicated musicians who believe in the power music to tell a story and set a mood. We have been playing for a little over three years now together but have been playing music for all our lives. Music is something that we need to have in our lives without it we would surely perish!

Every band, group and artist have a name - what is the story behind yours?

We tell stories through our music and almost all our songs/stories are about different kinds of pressures. Sometimes the pressure is bad and other times it's good, but ultimately it's how the listener interprets the song.

How did the band/group get together?

It all started years ago when Simon became Emil’s guitar teacher. They found each other and started playing in a cover band. By this time, we found a lead singer and they found Olof. We did our first own song, and as soon we started walking that path there was no going back. No more covers. We play “story metal” and it’s a mix from many different genres.

If you could describe your group/band in three words what would they be?

Tell us at Voice about your latest release, what makes this project different?

We will release our first album on the 7 May, “Path Of A Shadow”. What makes it different is It’s the world’s first story metal album release. (That I know of anyway). We tell you a story through the album. There will be songs in Swedish, German and English. There will also be a 11 minute story track.

Nothing in music is ever new but how do you try to keep your music, artistry and vibe original?

It’s kind of a mix of many different genres. Each song is a real story from real life from one of our band members or someone close to us. We don’t try to sound like anybody else, when we create our music, we do what we want to do and what feels right. We are not actively searching for inspiration. but we know of course that we are inspired by many different persons/ bands but that’s in the subconscious.

What is your creation process?

It usually starts with Simon as he is usually the one collecting stories, and he tries to listen to people around him and he tries to dare to live life to experience things. He is a bit crazy and never back down from the chance of gaining a new experience. When he gets an idea, story or emotion that he needs to write about he get into a state of mind that forces him to write the song. He usually do it in one take. Write the lyrics, and the music comes to him, He flows through it all and records everything, drums, bass, guitars, vocals and after that he is totally exhausted. Then he show this to the band and if all agrees that there is something there, we continue on.

We are influenced by ordinary everyday people that have a real self-experienced story to tell us. That’s the basis of our music – telling real life stories. A heavy sound with a lot of guitar melody’s and a lot of vocal harmonies.

If you take the Vocals from Rammstein, mix it with the guitars of Bon Jovi, Guns N’ Roses and Mötley Cruem and add the drums of DIO and finally add a little bit folk music into that mix then you have our sound.

How do you remain motivated to create, and do you have any tips for budding artists?

Believe in what you do, do it with love and don’t get to tempted to break though at any cost. If you lose track of what and who you are, you will probably start thinking it’s hard work. AND it is hard work, but you will not feel that way if you love what you do.

No, my music interest started pretty late in life. When I was 8 years old, I started to play the trumpet. I did that until I was 14 years old and then I got tired and stopped. Then it took a lot of years but when I was about 25 years old, I got the idea that it would be nice to be able to play the guitar. I realized pretty fast that I will never be an awesome guitar player and so I tried to sing “for the first time in my life”. Now I am hooked!!

The release of the album will sure be it!

We are working on the final steps for releasing our first album. After that we will release a German EP that is almost fully recorded. And between that we are rehearsing together. Why? Because we love it, and when Covid-19 starts getting under control we want to get out there and do great live performances from day one. 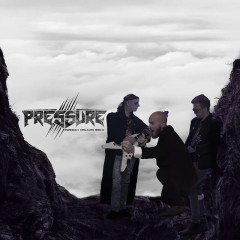 We speak to the 'first story metal’ band called  Pressure, to learn more about their unique sound, advice for up and coming artists and new music - Read on for more.