Chloe Potamiti is back with her second film for the Voice Winter Film Festival, Mora. Mora explores and visualises the experience of sleep paralysis in this visually experimental short.

My name is Chloe Potamiti, and I am a 23-year-old filmmaker from Greece. I started practising photography when I was 14; after four years of portraits, events and themed photoshoots, I became interested in filming. I had always enjoyed watching films and exploring different genres but never thought that I could make them myself. So I decided to go to university and learn how to. I attended Brunel University London, where I studied Film and Television Studies and graduated in 2020. I am particularly interested in documentary and experimental filmmaking.

What is the film about, and what inspired you to create it?

‘Mora’ aims to represent the experience of sleep paralysis. I have experienced this a few times in my life, and although I found it terrifying, I was also fascinated by it and wanted to depict it visually. One of the times it had happened to me, I woke up from a dream into paralysis, and the feelings I experienced were relevant to my dream. We tried to recreate this in Mora through depictions of people, noise, anxiety and suffocating, as she was choking in her dream in a busy train station. Some cultures associate sleep paralysis with a supernatural creature, which presses down on your chest or sits at the foot of your bed. ‘Mora’ is the Greek name of this creature.   The film was a university assignment during my second year at Brunel. Although the concept was my idea, it was made by our group of four people, with everyone contributing equally to the process.

I wish I could say I have some moving process, but most of my films have come to me while in bed trying to sleep. When I’m about to sleep, I’m at my most relaxed or least distracted so that ideas can come more easily. I then rush to note it on my phone because I know I’ll forget it when I sleep. What I find most useful is discussing the idea with people. For example, Mora was just a vague concept in my head before telling my group about it. When everyone added their thoughts and ideas, that’s when it became a film.

Thankfully I had a great team, and filming was mostly smooth and on schedule. However, we did face the obstacle of filming at a train station. We hadn’t researched this beforehand and thought we could pop in, film a scene, and walk out. A few minutes into filming, a TFL employee came and asked us to leave. I spoke to the supervisor, explained it was a student project, and we only needed to film one short scene. Thankfully, he was very nice and understanding and allowed us to stay for one hour.

When we made Mora, I was living with a friend who suffered badly from sleep paralysis. It was a regular occurrence for her and affected her sleeping pattern badly. When I first showed her an unfinished cut of the film, she immediately smiled. She said it extremely accurate and represented her experience. This was a proud moment for me. The entire film was handheld, which adds to the instability and anxiety of the film. However, if I were to do anything differently, in retrospect, perhaps I’d try some different grip equipment to make some camera movements smoother. 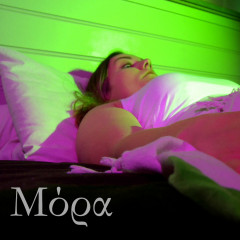 Chloe Potamiti is back with her second film for the Voice Winter Film Festival, Mora. Mora explores and visualises the experience of sleep paralysis in this visually experimental short.