Daniel Kinch is a climate activist who is performing PLANET PHUCKETT! – a solo comic play about global warming and the future – as part of [email protected]'s second season.

My name is Daniel Kinch. I’m a Scorpio and my favourite color (colour) is royal blue. I like long  walks along Coney Island as long as I don’t find bodies (rodents or otherwise). I live in the  People’s Republic of Brooklyn, New York (that’s what my anarchist friends call it) and have  since 1986. I have mostly written about troublemakers—real people who’ve swum against  popular thought.

I’m mostly retired. I spend the morning looking for background work in film and on television,  and look up other work or research for my other work. I spend a lot of time on my bicycle.

Mostly that I don’t have it. At least the full-time day jobs I had.

I was doing ‘enrichment teaching’ for a while (classes for middle schoolers in chess or acting or basic computer programming) and because of the increasing gentrification of the city, I was  spending more time on the road than in the classroom.

You are participating in season 2 of [email protected] Tell us about your  show?

The play is called PLANET PHUCKETT! It’s about a scientist cashiered from his university job  for being a tad too honest about global warming and what we face. He has gone on the road to  impart the information he isn’t able to do in his own classrooms anymore. What he longs for is  to share this with people so that they can make appropriate life plans. He’s all for the idea of  the world being our hospice (his mother has recently passed). He has tried to tell his story in a  somewhat amusing way, and he speaks directly to the audience.

I talk about climate in ways that most media outlets don’t. My inspiration for this piece is Dr.  Guy McPherson, who’s warned about the coming disaster for nearly two decades. I’ve also read  up on other scientists with similar messages including Peter Wadhams and Jason Box. I’ve found that people want to confront me sometimes, which isn’t possible in a video format.

How have you found the transition from live performance to online? Have you  found it constrictive or has it allowed you to experiment more?

I felt more spontaneous doing the play in this format—I could keep impromptu moments that  obviously I wouldn’t have in a live performance. But one moment of interaction isn’t possible.  At the end of the stage play, I invited the audience to come up and take seed packets, with the  idea that seeds conquer concrete in the end. I miss that.

I wrote a play titled A CLOWN, A HAMMER, A BOMB AND GOD, about a pacifist priest named  Carl Kabat in 1997, and my play about his protests was toured around the US and much of  Europe. Good Friday 1994 fell on April Fool’s day, so Kabat dressed as a Clown and broke into  a nuclear weapons base in North Dakota, and disabled a Minuteman III missile by hammering  the silo shut. We performed at the 1999 Hague Appeal for Peace.

I also produced a play about protest for the Occupy Wall Street Movement entitled HOW TO  STOP THE EMPIRE WHILE KEEPING YOUR DAY JOB. I performed in 2016 in Washington, DC  in front of the Washington Monument. Picture below. 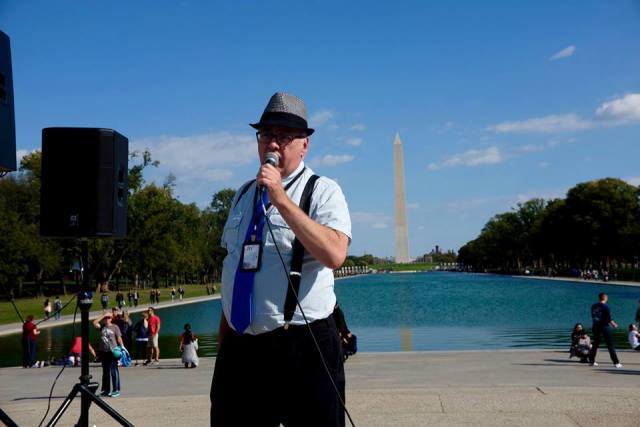 Dunno. Here in NY, real estate prices for usable theatre space have been pushing arts groups out, and anyone with a few hundred dollars can mount a video production like mine. I think it will take a decade for live theatre to revive here, and I don't know how things will work in Europe.

Everyone has been very nice and helpful. The conference last Saturday was very useful. I found  out that friends who’ve been part of the Fringe Festivals have performed at TheSpace.  Hopefully at some point people will travel across the pond again. I have a big catalog of work  to share.

I just kept  doing plays. I kept submitting my work. Once people saw the play A CLOWN, A HAMMER, A  BOMB, AND GOD, they wanted to see other work I had. Your work is your best promotion.

Can you describe your biggest challenge so far in your career? How did you  overcome it?

The huge turnover in theater groups in NY as a result of the increasing expense of doing work here. I’ve had full-length ‘standard’ plays that should have been produced long ago, but the Off-off companies that used to take chances on such work are mostly gone. It’s why I write solo plays—they’re easier to stage. And self-producing them is quite inexpensive. I can produce almost any of my solo shows in a Church basement.

You’ve been granted the ability to send a message to 16-year-old you. What do  you say?

BE A NICE GUY! Theatre doesn’t thrive on loners. Return favors. Be polite. Don’t get in p*ssing fights with other creatives, that doesn’t help either of you.

Ummm…. Gee. If you see my play, you know I don’t have lots of hope for the future. That said,  write things that nobody else is writing. Learn acting skills even if you don’t plan to be an actor.  Pick up skills—anybody with a decent laptop can learn some music skills. Care for your body.  Again, we humans don’t have a lot of time left. Do the things you love.

My website has a whole page devoted to my one person shows. At the bottom of the page is  contact info. I’m open to bringing my play to your locale or creating a one-person show for you  if that’s what you want. https://brooklynculturejammers.com/2014/06/25/about-my-one-person-shows/ 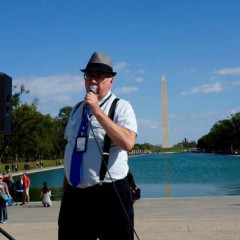 Daniel Kinch is a climate activist who is performing PLANET PHUCKETT! – a solo comic play about global warming and the future – as part of [email protected]'s second season.