Melanie holds five (yes five!) opera degrees, has a tame pet sparrow, and is the only Canadian performer to perform in Chad. She also has two shows available to watch for free in season 2 of [email protected]

Hello! I’m Melanie Gall. I’m a Canadian music historian who writes, performs and tours shows featuring historic music. I hold five (?!) opera degrees, have performed as far afield as Khartoum, Sudan and Brunei Darussalam, and have recorded several CDs. Saving songs from being lost is my passion, and reintroducing forgotten music to the world is one of the things I love most.

Right now? Well, we’re under a stay-at-home order here in Canada, and I have a tame sparrow as a pet. So a typical day involves running around the house behind the sparrow doing whatever she’d like me to do (it ranges from shelling peas for a snack to playing piano so she can jab at the moving keys). Since there are no live performances at the moment, I’m working as a dramaturg and literary editor, so I spend a lot of the day on that.

Making other people happy through something I love to do is the best thing ever. My ‘job’ ranges from promotion, graphic design, sound editing, costume design, writing, rehearsing, travel planning… There is a huge list. I have learned so many things and am constantly honing new skills. But also, my job usually features travel, flowers and adventure. So that’s just great.

Hauling suitcases full of props across the globe can be a bit stressful. Especially when they’re delicate or they get (temporarily) lost.

I’m doing two shows: The first is Piaf and Brel: The Impossible Concert, which is a cabaret concert of Edith Piaf and Jacques Brel songs. The second is Ingenue, which is about the rivalry between Judy Garland and her fellow 1930s star Deanna Durbin.

Well, these are recordings of live performances from before the pandemic. So they were not recorded to be later marketed as digital theatre under an unexpected worldwide pandemic. However, they give the sense that the audience is present in the theatre. An audience should expect 45-50 minutes of musical entertainment, along with a bit of education. My shows are generally not hard-hitting dramas – I want people to be happy and nostalgic, and so hopefully the audience will also get a few cheerful moments of nostalgia with the old-timey music. ☺

As a vocalist, online performances do not showcase the best that I can do (that is why for this series, I am presenting shows recorded pre-pandemic). I am working with the limitations of my performance space (in other words, my living room), as well as the limitation of the audiences’ computer/phone speakers. A lot of my shows feature audience banter, which also clearly doesn’t translate seamlessly to a digital performance. For me, digital performances are a way to keep in contact with my audiences and to keep a performance presence, but I will be happy to transition back to live theatre.

I think online performances can really work for some people. A friend does an immersive series of adventure shows, and they are perfect in a digital medium. So yes, I think some online performances will remain popular, but I sincerely hope live theatre will come back with a vengeance!

I have worked with the Space UK for the past five years, and as always, I find them supportive and professional.

Well, selling out the runs of Piaf and Brel at the Edinburgh Fringe for three years was certainly one highlight. I also performed at Royal Albert Hall as part of their Women in Jazz series. Another highlight was a concert I did in Ndjamana, Chad. I am the only Canadian performer ever to perform in Chad, and it was an unforgettable experience. Also, of course, there was that concert at the nudist resort…

How did you get into the industry?  Have you also worked outside the arts?

My great-grandfather, grandfather and mother have all been musicians. I always planned to be a performer, and it seemed like it was meant to be. I do also work as a dramaturg/literary editor, and occasionally as a video editor, but those are also in the arts. For me, I started in opera school and worked as a classical singer for several years before deciding that writing my own shows was actually far more rewarding.

The biggest challenge… Okay, that’s easy. So I was performing an off-Broadway run of Opera Mouse, a children’s opera show that I tour worldwide. It was a huge deal to be offered an Off-Broadway run of the show, and the theatre was full.

Aaaaaand… I lost my voice. All those New York Subway Bronchitis germs floating around, plus a sketchy Air B&B, plus a recording project I was doing at the same time led to a morning where I awoke barely able to make a sound.

But I needed to sing opera. Over the excited piping voices of a roomful of children!?

At the last second, I managed to convince an opera singer friend (luckily, New York is swarming with opera singers), to come to do the singing part of the show. I waved the puppets and croaked out the dialogue, and Korin saved the day by doing the singing. Luckily, it was the last show of the run, and for the next three months I was on vocal rest and things soon sorted themselves out.

I have definitely seen changes in the industry, but I still feel that there are ample opportunities for a strong show to successfully tour and to draw an audience.

It’s worth it. All of the struggles, and the hours in a practice room, and the research. It pays off in the end. But also, enjoy yourself a bit more along the way, because we’re following our passion, and so few people get to do that – so keep plugging along, teenage Melanie! And seriously, learn to pack light!

Find where your passion actually lies. I was sure it was opera. I worked for years to hone my skills as an opera singer, and it was only after I started to be successful that I realized that it wasn’t making me happy. It is okay to make a change, and it isn’t giving up.

But also, put in the work. The classical training I received was immensely valuable and I use it every day. Hone your writing skills. Don’t burn bridges. Be professional at all times. And take the chance on what you believe in, because you never know what will happen.

It’s part of the Space UK season, so check out their website for all the details. And in 2022, I’ll be in Edinburgh performing a couple of shows, including my new concert of ‘lost’ Prohibition songs, “A Toast to Prohibition”.

You can watch both Piaf and Brel: The Impossible Concert and Ingenue at [email protected] 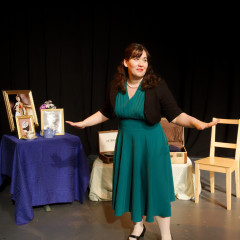 Melanie holds five (yes five!) opera degrees, has a tame pet sparrow, and is the only Canadian performer to perform in Chad. She also has two shows available to watch for free in season 2 of [email protected]