My name is Peter Hudler, I am a classically trained cellist from Vienna, Austria.

At the moment I cannot play concerts or travel due to the pandemic, so I plan coming seasons, practice and generally work on my projects at home.

I am free and have the possibility to be creative, I can share something valuable with other people and give them something special that in many people's life tends to be lacking a bit.

The challenge of course is to deal with a world that seems to be losing interest in the arts and culture, and puts every aspect of life under the dictate of efficiency and profit. And of course all the administration work that comes with a freelance life…

It's a one hour livestream with some of the best pieces from my shows at the Edinburgh Fringe, a colourful mix of styles bringing together the most disparate genres, literally from Baroque to Rock.

I liked it at the beginning, because there is less pressure, but in the long run, performing without an audience doesn't make sense for me at all.

Not after the pandemic, I don't think so.

Very nice and uncomplicated as always, and I really appreciate what they are doing online now.

I loved some of the concerts I played in orchestras, especially chamber groups. I played chamber music concerts in Rome, Moscow, Vienna and other places that were great experiences. I am proud of the CDs I recorded recently and of some of the gigs I organised myself here in Vienna.

I just entered the conservatory and from then it kept going until now. I did some small student jobs outside the arts like working at a restaurant etc, but no real full time jobs.

I quit a full time job five years ago because I was unhappy in it. It was very well paid, but I wanted to be free and creative and keep evolving and that was impossible in these surroundings. What followed was a bit tough because I had to learn how to move around as a freelance and develop my own projects. It has proven to be the most rewarding in the long run though.

Like probably everywhere the gap between a few people who earn a lot of money and the struggling rest has widened up more I think. On the other hand, the so called classical music world I come from has been opening up a little bit and trying to find new and less dusty ways of relating to audiences. I would like to see much more of this, absolutely.

Keep going on your way and don't confuse other people's problems with your own.

Don't just learn the instrument, learn the soft skills as well. Never forget why you loved music in the first place.

For now, there is the stream on online theSpace UK: https://online.thespaceuk.com/show/cello-on-fire

I hope to be back to the Fringe in August 2021, and there is a UK tour planned for October 21.

You can watch Cello on Fire over at theSpaceUK's website: https://online.thespaceuk.com/show/cello-on-fire 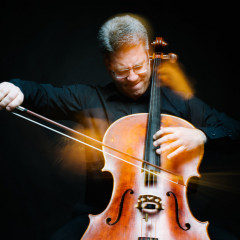