"Audio is an incredibly austere form, and you have to work very hard if you’re using it to create a comprehensible narrative."

Would you like to introduce yourself to the readers?

When I was ten years old, a local news team came into my primary school and interviewed a number of children in our class about changes that were being made to the 11+ (why I don’t know; I never took the 11+). When they came to me, I froze in front of the camera and had nothing to say. Some of the other children laughed and said that the news team would use the footage to humiliate me later. Until now, that was my only experience of being interviewed.

For those who haven’t listened to Love Under the Sign of Teletrex yet, could you give the readers a taste of its story?

It’s about a capitalist surveillance system called “Teletrex” listening in on various characters’ sexual or romantic relationships, and rendering what they say for use in advertising content.

Why did you choose this medium for this story?

It was accidental, really. A friend of mine had recommended the album Photographs by Graham Lambkin and Jason Lescalleet, which is mostly made of field recordings of the two men visiting each other’s families. A lot of it sounds like eavesdropping or secret recording. It’s very domestic, funny, tender, eerie. Around the same time, I also happened to be reading articles about surveillance capitalism... I guess at some obscure point during the process of absorbing these (and many other) things, the idea for the New Creatives piece was formed.

What inspired you to go for this particular subject matter?

It seemed like a potentially interesting way to examine the messy entanglements that exist between erotic life and consumer capitalism. Advertising has always looked for ways to mine our most primal desires (Adam Curtis’ A Century of the Self gives a nice potted history of this). With the advent of certain technologies, advertising has become more and more targeted and personalised. I imagined a situation in which a person’s very specific desires could be used to target them very directly. What if a couple was having an argument about shampoo? What if the argument was about how Partner A is cheap and doesn’t pay their way, and this pointed to a larger theme of the couple’s relationship, e.g. Partner A hates sharing things with Partner B? What if a company tried to use all the emotions whirling about in that conversation -- anger, fear of loss, the promise of forgiveness -- and used it to advertise more shampoo to this couple?

There’s an enormous culture of suspicion and hearsay around the question of how our phones are listening to us and how that information is being used. It’s odd, because in many ways we’ve become completely accustomed to companies spying on us (Cookies, etc.), and in many ways, we’re quite comfortable (perhaps dangerously comfortable) with these companies spying on us. But for some reason, there’s something about our phones listening in on our spoken (as opposed to written) language that seems spooky, makes us shudder. I don’t know if there’s a Freudian anxiety lurking there---the fear of what we might say that we didn’t intend? Or possibly it’s because this kind of aural surveillance feels more invasive, on a sheer physical level, than how we search for things online. Your phone is with you in bed, on the sofa, you read it on the toilet; it can listen to you burp, sneeze, curse, kiss.

This all really puts into sharp relief the fact that capital is present in every aspect of our lives, even aspects we thought were out-of-bounds, but it’s exactly this out-of-bounds material that constitutes the stuff of consumer capitalism. Capitalism is as totalising a force as any police state, but it does not exist in our lives as some invading force; we’ve invited it in. Maybe that’s why the idea of our phones listening in on us makes us so uncomfortable. It’s easy to forget about the costs of our comfort when they affect people we don’t know; it’s harder to do that when the costs appear closer to home.

I’m not convinced Teletrex succeeds in communicating any of this, or even if it ought to, but these were my thoughts behind it, at the time.

What were some of the challenges in producing this work?

Audio is an incredibly austere form, and you have to work very hard if you’re using it to create a comprehensible narrative. That was a challenge in making this work, which really demanded I do that to some extent: make a more comprehensible narrative with all its attendant sounds. To create a “real” audio world, you have to make sure there are all these “real” signifying noises. Is someone drinking a cup of tea here? If so, should I add sound effects of slurping and the spoon hitting the cup, to make sure the listener knows someone is drinking a cup of tea? It’s not something I’d done before and not something I generally appreciate as a listener. Don’t get me wrong; there’s something quietly beautiful about the world of mundane sounds in, say, The Archers – all that sighing, all the cattle lowing distantly, all that tea being brewed. But it’s not something I ever wanted to do in my own work – or had to – until this piece. The kind of audio works I tend to make are maybe more fluid, more mysterious, more lyrical in their use of words and sounds. I guess I don’t want to be pinned down to reality too much. It’s a matter of taste. Perhaps while making Teletrex, I was going through a period in which I had to make something that sat between these two styles, although I don’t think I succeeded.

The practical challenges were innumerable but made far more manageable with the help of the NTS/ICA production team, who guided me through it all. Perhaps the greatest challenge was the deadline. We were only given a month to write, perform, record, edit, and mix the piece. Given the fact that everyone involved in its creation (actors, producers, me) had multiple other work commitments during the production period, it’s kind of miraculous we managed to make anything at all.

Which part of the production process did you enjoy the most?

I wanted the dialogue to sound as naturalistic as possible, so the performers improvised. I produced “story documents” about the characters, their backgrounds, etc. (an idea I plagiarised entirely from film-maker Joanna Hogg), and I provided prompts and notes for the actors between takes, but beyond that, it was all their work.

I’m a naturally very lazy person, so the experience of sitting back and hearing each actor take an idea and realise it in all sorts of startling and unimagined ways was a source of great delight to me. I had to listen to about five hours of raw material so that I could edit it down into fifteen minutes, but at no point was this process a chore. Even the roughest take contained something I didn’t expect to find, something tender, strange, funny. It was both pleasure and torture having to choose between this or that scene, and this was all down to the wonderful work of the actors.

What, if anything, do you hope young people will take away from your piece?

What are you going to work on next? Do you have any projects on the go?

I want to make something long -- like an audio-novel -- but have no idea what it sounds like.

We also reviewed Edward's New Creative piece, 'Love Under the Sign of Teletrex', and you can read our thoughts on it here. 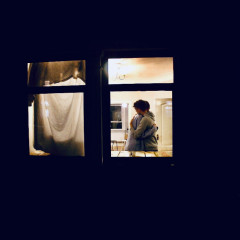 "Audio is an incredibly austere form, and you have to work very hard if you’re using it to create a comprehensible narrative." 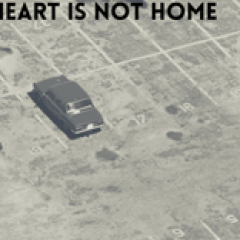