Can you introduce yourself, and tell us a bit about your artistic background?

Yes, I am Amber Akaunu, an artist, filmmaker and co-founder of ROOT-ed Zine. I’m based in Liverpool and am currently studying a master’s degree in documentary filmmaking at Goldsmiths college in London. I love watching k-dramas, listening to music and baking cakes!

I create art and films that explore concepts and ideas surrounding race and identity through my perspective as a Black woman from Liverpool. I use many mediums from photography to film to pencil, paint and illustration to present my explorations.

Afro Hair Rituals is your TV debut, and it is beautiful. Why did you choose to depict this snapshot of Black culture?

I have had a very turbulent, at times, relationship with my hair and talking with friends and family, I realised that this experience wasn’t just my reality alone. Black people are made to feel less beautiful because of so many things, but one of those things is our hair. I personally have had some awful things said to me because of my hair that as a child really stuck with me. I guess the making of this film was for all of those times I hated my hair, my culture, my skin and my history.

Tell me about your creative process for AHR?

The process was great, especially as I received a lot of support from New Creatives North, my producer (Barrington) and mentor (Bibi). It was quick as I was certain on exactly what I wanted. It’s an idea I’ve had for a while. The creative process was elevated by the cast and crew who were all incredibly talented and strived to bring the vision to life. I also worked with friends and family which made the atmosphere on set so relaxed which I believe translates in the film.

AHR is a subtle celebration of African culture, but it also has a powerful message. What was your intention behind creating AHR?

I wanted the film to be a direct message to the whole Black community that our hair, our culture, our essence is beautiful at its core, it’s just society that has tried to make us believe otherwise. Also, we don’t see Black people on TV with their natural hair out and I think that imagery in itself was so powerful. I think about my siblings and cousins who have had to be surrounded by media that doesn’t represent them, or when it does it’s watered down or in a negative light. I will always strive to create imagery of Black people that is an accurate representation of who we are.

Why did you choose to present the film in such an intimate setting?

The film is inspired by my nan. I used to live in the next street to her and would often walk over to her house and would always be greeted by a big hug, warm food, the smell of incense and artwork all over the walls – it felt so intimate. I tried to capture that feeling through the visuals, colour and sound. Also, a quick fun fact; my nan, Abeni, actually plays the nan in the film!

How did you end up on this career trajectory?

I studied fine art at Liverpool Hope University where I was introduced to the wonderful world of video art. I really liked filming and editing and naturally explored more traditional film pathways which is what has led me to here. I still see myself as an artist as I often create more abstract non-narrative video pieces that belong in a gallery rather than a cinema. However, long form video is something I am getting into more and more. It’s interesting trying to navigate both the film and art world but I am inspired a lot by the likes of Steve McQueen and Jenn Nkiru who occupy both spaces and are respected in both too.

What do you know about the industry now, that you wish you knew when you were first starting out?

I didn’t realise that organisations have to sometimes meet diversity criteria that allow them to have access to funding to continue to run their organisations. So, myself as a Northern Black woman, working within these spaces, I add value outside of the obvious value of the work I create and time I dedicate. A lot of tokenism happens due to this, and other reasons, so I always try to go into these experiences making sure I also gain something too.

What advice would you give to those wanting to enter the industry?

My advice would be to know your worth, understand the business and do what you love!

I am studying a master’s degree at the moment at Goldsmiths, so I am looking at making work that leans towards exploring nonfiction stories and narratives. I am also in the process of making a second part of AHR in which I invited people to share their ‘Afro Hair Rituals’. Due to the pandemic, this has taken longer than anticipated but I’m looking forward to finishing it and sharing it.

Where can we find more from Amber Akaunu? 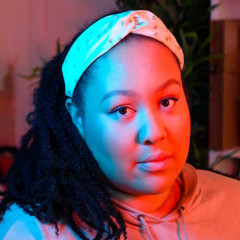