Could you first introduce yourself?

Congratulations on winning the BBC Young Writers’ Award with First Story and Cambridge University! How does it feel to win, especially after shortlisting in 2018?

It feels absolutely incredible! Just being shortlisted for a second time was a huge honour, but actually winning was unbelievable. It’s really nice to think that I’ve matured as a writer since my first shortlisting and come back to the competition stronger.

Why did you want to enter the YWA?

My experience with the award back in 2018 had been incredibly positive, and I got to meet lots of inspiring people. It really re-affirmed in my mind that this was a top-quality competition which took young people’s writing seriously. This is also the final year I’m young enough to enter, so I thought it would be nice to have another go at it!

Tell us about The Changeling? What was your inspiration?

The Changeling is a sort of modern fairy-tale. It follows the coming-of-age of a young girl born with astonishing physical abnormalities, and the dawning realisation of her true abilities and place in the world, as seen through the eyes of her mother.

It was inspired by the folkloric myths of ‘changeling children’ which were especially prevalent in Britain during the 16th century. Many people truly believed that if a child was born different in some way, especially if it showed symptoms of a disability, that it had been swapped for a fairy child and needed to be swapped back. This was a belief used to shun disabled people, but I thought there was something oddly empowering in the perception of disability as a supernatural power. That really captured my imagination, so I decided to adopt elements of this ancient tale into my otherwise modern story.

What was the creation process like for your story? Do you have a particular way of working, and how long did it take to write?

I generally spend a long time thinking about stories, and then write them down very quickly, all in one go. I had been wanting to use the idea of Changelings in a story for months, and the concept of a child born with wings was something I had scribbled in notebooks even many years ago! But the first draft of this story, once I settled down to it, only took me an afternoon.

What first drew you to literature?

I have always been a massive bookworm, and when I was about nine or ten I started to show a keen interest in writing my own stories. My fantastic English teacher at the time – thanks Mr Arnott! – furnished me with a library of brilliant short story collections, helped me create plots using ‘story cards’, and encouraged me to enter the BBC 500 words competition, a sort of younger precursor to the Young Writers’ Awards. I adored the whole thing and I’ve been writing ever since!

Who are some of your writing inspirations?

I have a very eclectic taste. My inspiration ranges from children’s authors like Liz Kessler (who mentored me growing up and was a huge inspiration), to great historical poets like Byron or Plath, to Shakespeare. In general, I love any narrative which explores the nature of difference and otherhood – my favourite novel, John Wyndham’s The Chrysalids, had a huge impact on me in that respect.

What do you plan to do next? Are you working on anything at the minute?

As well as finishing my degree – I study English Literature – I’m incredibly keen to keep on writing and hopefully be a published author one day. I’m currently working on a collection of dark, disability-inspired fairy-tales, much like The Changeling. I’m also part way through the first draft of a children’s book.

Do you have any creative pursuits outside of literature and writing?

Various forms of writing are my main creative outlet. As well as fiction, I enjoy writing letters to my friends and occasionally I dabble in some poetry or scriptwriting.

What advice would you give to someone who wants to follow in your footsteps and take up writing?

Do it! And try not to compare yourself to the books on your shelf; it’s not helpful or encouraging to compare your first draft to somebody else’s last draft.

Where can people find you online, or read more of your work?

You can listen to the BBC Radio production of my story at www.bbc.co.uk/ywa and I’ll be on BBC Radio 1 Life Hacks this Sunday, 11th October. 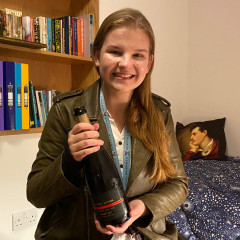