We talk to New Creative Laura-Beth about her film short film, The Gift.

Could you introduce yourself and the film?

I'm Laura-Beth. I'm an animator based in Bristol but originally from Portland in Dorset. I make animated films and commercial works in a range of styles and techniques. I’m a founding member of the Weird Eye Collective which is formed of a trio of women who make films with quirky and often dark undertones.

What inspired you to make a film about magic and menstruation?

We originally started Weird Eye to make an anthology of films around the idea of Bad Luck. Early on we started to research superstitions and found lots around menstruation. It occurred to us that many of these superstitions or taboos were negative and constructed to restrict the activities of menstruating people or make them feel unclean or unhealthy. However they also seemed largely magical, such as being able to turn dairy and alcohol bad, make plants wither and dogs go mad. To me it seemed there were parallels with untapped or unguided spells, as if they were happening around you, caused by you and your menses – but if you could learn to control them and harness them then perhaps you could use them for your own benefit.

What was the creative process behind The Gift?

I’d been working on the film for a while on weekends and between other jobs, then I saw a callout for submissions from Calling the Shots for their New Creatives scheme looking for short film ideas, based on the idea of living in modern Britain. I originally pitched two film ideas and The Gift won out. Witchcraft has a long history in Britain and menstrual taboos, stigma and poverty is an ongoing battle in all countries, so it struck a chord. From there I worked with their team to develop the script and was teamed up with my mentor/producer. I had a team pre-assembled so we set to work and produced the film over a couple of months. The film was mostly created in After Effects and Photoshop. The character design was produced by Karl James Mountford, an illustrator based in Wales. The majority of the other artwork such as backgrounds, props and additional characters was created by fellow collective member Hannah Stevens who also animated a few scenes. I had fun designing the final goat and all the rigging and the majority of the animation. The third member of Weird Eye, Fiona Viani-Pericchi, created the water and fire using digital  hand drawn animation. The sound design was done by my partner Ben Mitchell, who also helped finesse some of the trickier scenes. The voice of the main character was provided by my childhood friend Rowan Carmichael.

Why did you decide to bring this idea to life as an animation?

Animation has a unique ability to visualise the unreal, to tailor every frame, shot and minute detail. Animation provides ultimate creative control and collaborative potential. There are lots of little easter eggs in the film, that are onscreen for a few moments or buried in the backgrounds that help create a sense of foreboding and give little visual aids to the witchy or magical happenings occuring, things like the witches altar in her bedroom, the drying plants in the kitchen or the wilting plants in the living room. Little things for the eagle-eyed or those in the know.

Why do you think there’s such a big stigma around periods?

I think it’s still massively misunderstood. When you think about it, what seems like quite a lot of blood comes out of a person once a month with no visual wound, causes pain, can change the physical appearance and mentality of the person for a few days and then, just as suddenly as it started, it stops. In early society that must have seemed like some kind of magic, powerful and potentially dangerous. With women particularly there is much stigma around lots of our natural bodily functions like hair growth, sexual organs, breasts, weight, emotions and general appearance. Menstruation is just one aspect of our day-to-day life that is misinterpreted, misunderstood and often mistreated.

Oh that’s a hard one, as I seek out new inspiration for every project I'm a bit of a geek and artistic chameleon. I like to change and adapt to what I want to talk about next. For this film I took a lot of inspiration from horror films like Rosemary’s Baby, Carrie, Blood on Satan's Claw and The Witch. In terms of art style the main character was designed by Karl James Mountford who does a lot of book cover art so his past work also had a big effect on the film. Along with his work in terms of movement, animators like Jamie Caliri and the talent working at Moth Studio helped to establish the performance and pacing.

I visited places like Glastonbury and The Museum of Witchcraft and Magic in Boscastle to do some further visual research. I also listened to Pam Grossman's book Waking the Witch: Reflections on Women, Magic and Power. I also made a special playlist to animate to full of witchy tunes.

Surround yourself with talented, like-minded people. Fiona and Hannah, the other two members of the collective, also worked on the film but are also constant confidantes and full of ideas. My partner inspires me every day. Also get in contact with your idols and people you want to work with, I’ve been lucky to have so many mentors in my life, some provided by universities and organisations like Calling the Shots such as Emma Lazenby who was a tremendous help and an absolute dream to work with. But also seek out your own, visit film festivals, befriend more developed artists and ask them for feedback. Do your research, read up on people, seek out their emails and be enthusiastic. The art and especially the animation community is insanely friendly and kind which is why I love it so much. Be careful, of course, but an email and social event are good starting points. I wish I’d learned to relax earlier, as I spent every waking moment in the studio trying to make “art” but I found that actually once I let go of this need to be seen doing everything right then my work got a lot better.

Experimentation is the key to development and you don’t have to be the best to make work, you just have to do your best and try to enjoy the process.

You can read our review of 'The Gift' here. 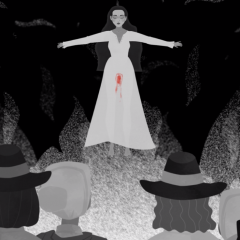 We talk to New Creative Laura-Beth about her film short film, The Gift.