"A lot of women I grew up around have been challenging these patriarchal narratives for a long time. It’s just that the mainstream media doesn’t pick it up."

Hi Afshan, welcome to Voice! Please introduce yourself and tell us a bit about Chop Chop.

I’m a poet and playwright based in Manchester. Chop Chop is the first installation of what I hope to be a series based on a stage play I wrote a while back. It takes place in an all-female halal butchers somewhere in the North of England. Shop owner Ameena decides to get her butcher's license and then dissects a whole cow in the middle of the shop on the same day a new apprentice arrives. The piece looks at the ways in which women are loyal to one another. They are all trying their best to not uphold patriarchal traditions but live and work in a male dominated world.

Chop Chop is an innovative audio story that explores themes such as identity, religion, sexuality and gender. How did you come up with the ideas behind the script?

Thank you! The idea stems from a workshop I did with Tamasha Theatre Company on their playwrights’ scheme. I always wanted to see something bloody on stage. There is something so visceral and strong about having a drama set in a butcher’s shop run by women. We grow up being told that women belong in the kitchen and yet it is the men who sell us the meat in butcher shops. I’m so accustomed to seeing women hold knives in domestic settings I wondered what would happen if we added lots of blood, meat and of course comedy to the mix.

The women in the play are inspired by the women in my life. For me, writing these women in their complex and contradictory identities was necessary – I very rarely get to see or hear Muslim women depicted in their multi-faceted identities on screen or stage. Muslim women are so often reduced to two-dimensional mothers, or sisters and never given any agency. In this radio piece I really wanted to let the women hold the power (and the knives) in their own hands.

You were both the script writer and director of Chop Chop. What were some of the challenges faced in adapting the script to audio?

I loved all the challenges. I found the limiting nature of the form pretty fun and exciting. I guess the biggest difficulty was probably the most obvious, there’s no visuals! I had to think of creative ways to give characters an entrance without introducing them in obvious ways. With sound you can really with the imagination. For example, the piece begins with Ameena (the main protagonist) in the middle of a cow carcass. This would have been really difficult to stage or even screen i.e. to work out exactly how big the cow needed to be, how to make sure it didn’t smell too much and wasn’t so repulsive that the actress wouldn’t be able to get inside. With radio I could play around with all of that and bend the rules slightly. There was no cow, or meat in the studio (we were allowed two knives which were kept with the producer for health and safety reasons). I had to trust the audience to be imaginative.

Chop Chop challenges the traditional patriarchal attitude that women should not own halal butchers. Why was it important for you to write about this topic and what other boundaries do you challenge through your work?

A lot of women I grew up around have been challenging these patriarchal narratives for a long time. It’s just that the mainstream media doesn’t pick it up. As well as the sexism and the racism faced by these women, I also explore themes around homosexuality in this piece. It was important for me to echo the lives of the women I grew up around, to highlight their narratives and show people that there are women with complex and nuanced identities that live all around us. Muslim women aren’t just one homogenous group and this piece touches on that very point.

Chop Chop is certainly not your first piece of work. Tell us a bit about some of your other work that readers can look out for.

No, it isn’t! I’ve just released my debut poetry collection with Burning Eye Books called [re: desire]. The collection explores what it means to love, be loved and belong from South Asian perspectives. It plays with different forms (poetry, script, prose) and bends our ideas of gender, sexuality and desire. I spent most of the lockdown working out how best to do a non-physical book launch and so created a few poetry related activities to make a ‘book-launch-in-a-box’.

A couple of years back I also directed my first short film with Random Acts North for Channel 4 called ‘An Act of Terror’. This was based on a one woman show I took on tour which flipped the stereotypes people associate with Muslim women on its head.

I also co-wrote the play ‘Santi & Naz’ with a friend Guleraana Mir, which had a small run at Vault Festival earlier this year. We even won an award for it. It was described as “tender yet sharply political” by The Guardian, and puts female friendship against the backdrop of the partition of India and Pakistan. Through light and humorous touches, the piece comments upon homosexuality and its recent legalization in India.

You have been involved in several projects that promote young emerging artists. Why is this important to you?

I was incredibly fortunate to be part of lots of development schemes and have access to mentors and I want to give back. It is only because of the networks that I have developed over time that I was able to find support for my early creative work. I now have a trusted group of creatives (which is growing everyday) that I can collaborate with, I can go to for advice, or even just rant on the phone. That network, those mentors, the leaders of the programmes have saved me and my artistic career numerous times. I just want to be able to do that for someone else. I also find working with other artists (emerging or not) really fun – it inspires and informs my own creative practice.

Do you have any advice for young people trying to carve out a career in the arts?

Reach out to creatives that inspire you, go to workshops and take part in development schemes and programmes and build your network of people. Those people will become part of your trusted network and your mentors – you may even end up collaborating with them.

Finally, where can our readers find you online? 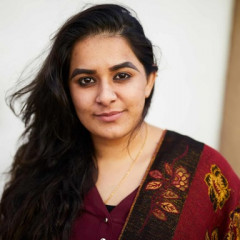 "A lot of women I grew up around have been challenging these patriarchal narratives for a long time. It’s just that the mainstream media doesn’t pick it up."