"There’s a lot of pressure on people to find work and you can very easily lose hope during this process. You will find something that’s right for you, but in the meantime take care of yourself"

Tell us about yourself: how would you describe what you do and your current practice?

I am a Liverpool based Illustrator who makes comics and animations. In my practice I explore supernatural themes with the mundane, I like to mix fantasy and reality to create engaging and relatable stories.

In your own words, could you tell everyone on Voice Magazine a little about your short film and what inspired you to make it? How did the idea for Job Haunting come about?

Job Haunting is about a ghost looking for work, and the film dips into issues on Job Seekers allowance and Universal Credit. The idea for Job Haunting began to form after I left University, it was a tough time for me so I made comics about it. I called the comic Job Haunting and self-published it. People liked it so I sent it to Pen Fight Distro – a small press based in Manchester – to print and sell copies for me.

After I made the comic, a few years passed and I still liked it. Usually I move on to the next thing, but Job Haunting felt like it needed working on further, so I pitched it to New Creatives North to turn the comic into an animation.

Do you feel you relate to the character’s experiences within Job Haunting?

The character was based on myself and my personal experiences on being on Universal Credit. The media often gives a negative perception of people who are on benefits, so I wanted to make a character who was trying her best to get a job and still failing in the eyes of the Job Centre. Which is often the case for most people.

What did your role entail when making this short film with New Creatives and who did you collaborate with? Can you tell us a little bit about the process involved to make this film?

I was the Director, Writer and Animator in this film. I collaborated with Fettle Animation to animate the scenes and to give me guidance on making my first full animation. I started with writing the script, which went through a lot of drafts. I wanted to talk about all of the issues I had with the Job Centre but most of it was cut out due to how it derailed the narrative. At the time I really wanted to go deeper with the issues but now looking back letting it go made the story easier to follow.

After writing I made an animatic which we used for the voice actresses to work with. I worked with actresses Katie George and Laura Littlewood, who provided the voices of my characters. They both smashed it out the park and really brought my characters to life. After that it was editing the timing, and then animating, and then more editing.

What have you learned from the process of making this short film? What new ideas or new skills do you hope to take forward from this project?

I learned a lot, such as planning shots, timing, filling in Excel sheets, new software – a lot of the fiddly stuff that requires using my brain. Mainly, it’s made me realise how much planning goes into making a film and it has made me more confident to make another.

The film highlights the problems with the jobcentre, the current benefits system and the pressure facing those wishing to start their career. It also highlights how those with specific skills are being forced into jobs that don’t match their skillset. Could you outline how these problems could be addressed?

I feel Job Coaches – who are people you are assigned to help you – are under a lot of pressure to put people in employment as soon as possible, which is good but people will be offered anything with little room to say no to it. That in turn puts pressure on people looking for work – often I received ‘warnings’ for not doing the required amount of job searching or even refusing a job that didn’t suit me.

People shouldn’t feel afraid of not receiving their benefits to live. The current system punishes those who miss the mark.

I feel the Job Center is outdated with their methods and not very knowledgeable on job paths for creatives. And the jobs on offer or found through the Jobcentre are often cleaning, retail and hospitality work. There needs to be a bigger range of choices.

Do you have any advice for young people who currently find themselves in the same position as your protagonist?

If you’re looking for work, you’re not alone. There are so many people in the same boat. There’s a lot of pressure on people to find work and you can very easily lose hope during this process. You will find something that’s right for you, but in the meantime take care of yourself.

What is the key message that you hope viewers will take away after watching Job Haunting?

I wanted the viewers to be aware of what it’s really like for people on Universal Credit and to change their perspective.

I’m working on a comic with my sister Sarah Garvey called Alien Agency. It’s an ongoing story about an alien and an alien fanatic. We’re hoping to release the comic online in August.

I have a few ideas to make an animation with a local musician, and a game, but I’m still on the search for funding to back up those ideas.

You can buy Job Haunting the comic on Pen Fight Distro’s website https://penfightdistro.com/shop/job-haunting/

Also, I have a few comics available on my online store: https://cathgarvey.bigcartel.com/ 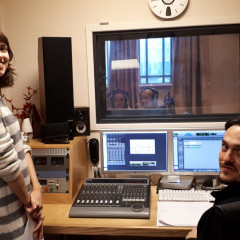 "There’s a lot of pressure on people to find work and you can very easily lose hope during this process. You will find something that’s right for you, but in the meantime take care of yourself"