“I think it's really important to go for those opportunities – you never know what they're looking for!”

Could you introduce yourself and the film?

I'm a writer, director and dramaturg currently based in the North East and this is my second short film, White Dwarf, which was commissioned by New Creatives North last year and is currently available to watch on BBC iPlayer.

What inspired you to make this film?

I mainly work in theatre but I've always been interested in film and how to tell a story in that way. I applied with a different script but during the development process I was assigned a brilliant mentor, Laura Degnan, and I sent her a version of White Dwarf which I had written as part of Live Theatre's 10 Minutes To... new writing night. Because elements of the script were really visual (a starry night at a campsite, a fire burning, torches) Laura agreed that it would translate really well to screen.

I guess my inspiration for writing the script was that I'm really interested in telling stories about women and female friendships.

What was the creative process behind White Dwarf?

I sent the initial script to Laura who gave me a lot of really excellent and detailed feedback. Then over several weeks we had phone calls and email exchanges and the script went through a lot of different drafts with feedback from Laura and also Ian Fenton from the Tyneside Cinema. It lost an entire character and an additional location until it became just Kat and Libby sitting in that spot in the campsite for the duration of the film.

During this time I was working with Sarah Dunn, a producer who helped me with casting. I had worked with Eleanor Chaganis (Kat) on a couple of things and I think she's brilliant so I was really keen to get her involved in the film. I had also seen Hannah Walker (Libby) in a couple of things locally and she's hilarious so I was so lucky to get both of my first choices to be in it!

Sarah also helped with location scouting and she assembled the crew and hired the equipment we needed for the shoot. She put me in touch with Ali Hutchinson who is the DOP [Director of Photography] for the film and we talked through the different shots we needed before we started filming.

Then the film went through editing, went onto BBC iPlayer and now we're looking at applying to festivals.

Why did you decide to set this film at a campsite?

I wanted the location to be somewhere that two friends might go to spend time together and I also wanted it to feel remote and isolated. I imagine that Kat spent some time researching where the best location in the North East is to see stars and planned the trip around that.

Do you think grief and guilt is something a lot of people struggle with?

I do and I think we often just associate grief specifically with death but I think there can be a real sense of mourning for the way things used to be – which is something I think a lot of us are experiencing at the moment! I think they are two things we find very hard to talk about as well.

What was your career path to where you are today?

Mine has been a bit of a meandering path! I did a degree in Drama and Scriptwriting at Northumbria University and from there worked a whole range of jobs some of which were in the arts and cultural sector and some of which were not. I applied for writing opportunities at local theatres and also tried to write/make as much of my own work as possible whilst also working with local theatre companies.

I didn't have a lot of experience in filmmaking when I applied for this opportunity but they obviously saw something in my ideas and supported me to make it a reality so I think it's really important to go for those opportunities – you never know what they're looking for!

Keep learning as much as you possibly can. Go to workshops and apply for opportunities and listen to people whose work you admire.

When I was developing my script, Laura and Ian both spent so much time and effort helping me to get the script just right. Of course you feel like you want someone to take one look at your work and immediately say, "That's perfect! Don't change a thing!" but that's very unlikely to happen! If you find people who really believe in you and will put in the effort to help you develop, really make the most of that. 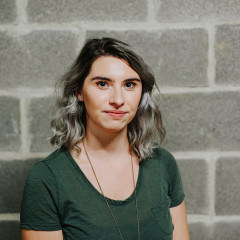 “I think it's really important to go for those opportunities – you never know what they're looking for!”