You’re allowed to take your time... Don’t rush into things, but find out what you like – and are good at – making.

Could you first introduce yourself to the reader, and tell us about Chronic Insanity?

My name is Joe, I’m a theatre maker and creative technologist currently based in Nottingham and I’m the co-artistic Director of Chronic Insanity. Chronic Insanity is a theatre company I run with Nat Henderson that aims to put on a high quantity and quality of lo-fi fringe theatre in found spaces with focuses on sustainability, accessibility, and creating opportunities for local theatre makers.

What did a typical day look like for you before Covid-19, and has it changed subsequently?

We were fortunate enough to have received an Arts Council grant just before lockdown hit, and we’ve had a few small commissions and pieces of funding since to keep us going. We’ve tried to keep to a similar day to day way of working by actively developing new projects with new collaborators, and rethinking the way that we involve people in the work that we make. I’ve also started consulting with some other live performers about how to best adapt their work to digital performance spaces.

Just before Covid struck, Chronic Insanity had launched a 12 shows in 12 months project. What was the plan for that – obviously beyond putting on a show a month?

We started the project for various reasons. We wanted to challenge ourselves and we wanted to put on a large amount of varied performances to learn more about what kind of work we like making and our audiences like seeing. We came up with the idea in April 2019 and we planned for the next few months in order to be ready to launch with our first production in September later that year. We were one ahead, with seven shows staged in six months, before Covid hit, so we took some time to reflect and we decided to pivot into digital theatre to be able to keep making work for people.

You’ve pivoted quickly and are now releasing three shows over three months. Are these from the original 12?

Two of these shows we’ve adapted from performances we were planning on staging this summer, one at the Edinburgh Fringe and another in conjunction with Nottingham Pride. The other one is a new piece very much inspired by the digital theatre technology we’ve been experimenting with during lockdown.

Tell us more about the work that went into that pivot. What considerations did you have to make?

I’m currently completing a PhD researching mixed reality storytelling and blending digital technology and theatre making practices. This meant that we’d been talking about what makes a good piece of digital theatre before lockdown had hit, already having made a few examples. The important consideration was being aware that traditional theatre can’t just be adapted into digital theatre. They’re intrinsically different media, like how a good book won’t automatically make a good film adaptation. An important consideration is to maybe start thinking from scratch about what stories to tell in this new medium, how do you tell them with the technology at hand and for which digital audiences and communities are they being told for.

Can you tell us about the shows that make up your Digital Summer Season?

We’re doing a production at the end of each month this summer. The production for June is Conduit, which follows a character using various different forms of technology, some people won’t have seen before, to feel closer to their currently absent partner. Our July production is Myles Away, that looks at capitalism and discrimination and follows an ousted tech company founder as they try and take back what’s rightfully there’s. Our August production is called 52 Souls and it is a pick and mix variety theatre show in which the audience uses a pack of cards to randomly generate a series of short performances examining death and mortality.

Were the shows ready made for a virtual experience, or did you adapt them?

The shows all contained digital elements originally in some way, but they’ve been adapted to fit the digital platforms we’re now using to exhibit them.

Some of these shows are interactive – what is the technology that powers that?

A lot of the interaction in the performances focuses around making the audience feel present within the performance, giving them roles or tasks during the production for them to perform in order to drive the stories forward in different ways.

Personally, when will you feel comfortable touring live again?

The fact that we’re on track to achieve 12 shows in 12 months is a highlight. When we told people we were going to do it everyone was encouraging but also sceptical, and rightly so because it’s a big undertaking. Finishing the project successfully is going to show that we’re ambitious theatre makers but that we can also reach the heights that we set ourselves. Also, the virtual reality show that we staged at the Nottingham Playhouse in February, called PVC, was a nice highlight. The Playhouse has been so accommodating and helpful in encouraging us to make work and in supporting it when they can.

And what has been the biggest challenge you’ve overcome?

Finding the right amount of flexibility and planning. We made a year long plan when we started the company of what needed doing, and when it needed doing, to get all 12 shows on, but we’ve changed the plan over and over again to adapt to regular fluctuations in our work lives, let alone a global pandemic. We’ve been managing to overcome it by going back to the plan at regular intervals and trying to build flexibility into it so we can still achieve the number of productions we want to but with enough wriggle room to still make work that is responsive to current events and new opportunities.

What was something you wish you were told when you were starting in the creative sector?

That you’re allowed to take your time. I know we’re putting a lot of productions on at the moment, but it’s after Nat and I have worked together on theatre in Nottingham on and off for three years and we formed the company because we knew our talents and working styles complimented each other well. Don’t rush into things, but find a space to make as much theatre as you can to figure out what you like, and are good at, making.

Do you have any other advice for someone who wants to follow in your footsteps?

In order to make the work that we make we’ve had to interrogate every theatre-making impulse and rule we thought we knew to look for ways to make a large amount of theatre, in interesting spaces, initially with no funding. It is definitely possible to do, but you have to be creative and ingenious with your allocation of time and energy and resources. But hey, if you need to reinvent theatre in order to make the work you want to make then maybe theatre needs reinventing, and maybe you can be the one to do it.

When, where and how can people watch your Chronic Insanity’s Digital Summer Season?

Each production in our summer season is released on demand on the last Monday of each month, initially available for one week. Conduit is released on June 29th, Myles Away on July 27th, and 52 Souls on August 24th. Pay what you can tickets and more information for all events can be found at https://www.tickettailor.com/events/chronicinsanity 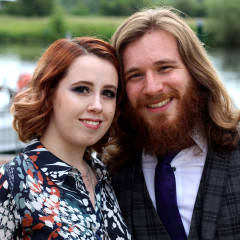 You’re allowed to take your time... Don’t rush into things, but find out what you like – and are good at – making.