Voice MagInterviewsInterview with Loz A…

“We have a need, as humans, to compartmentalise to a degree. We section things off in our minds in order to form a basic understanding of them.”

Hey, I’m Loz, a spoken word artist based in Northamptonshire. I’ve been writing and performing poetry/spoken word for around two and a half years now, with a focus to create and share some of the bolder aspects of life. My audio piece ‘Boxes’ is a glimpse into how I feel society can corner people into simple, two-dimensional stereotypes. The piece reflects this, whilst trying to embrace individuality across sexuality and gender.

What was the creative process behind Boxes?

Writing is how I try to make sense of things. Looking back, I think Boxes was initially a way of making sense of me in a world that didn’t always seem as if it was quite ready for me. I wrote down what aspects of that affected me, what ‘ammo’ I had to counteract it and then put an outward spin on it - in the hope of impacting others who may also be dealing with similar identity struggles.

Do you feel like spoken word poetry helped you break past these boxes?

Yes, definitely. On stage, I have often introduced Boxes as the piece that makes me proud to be me. Many people have picked out Boxes as one that has truly resonated with them and have approached me after gigs with awesome smiles on their faces. They don’t feel as left out in the world. It’s an amazing feeling to know Boxes can have that impact and it certainly feels like a celebration of individualism now.

How did you decide what music to include in the piece?

I didn’t. My musical ability, even to set lyrics to basic compositions, is utter pants. I am a spoken word artist for this reason. The music was thankfully out of my hands and the wonderful composer, Liz Purnell did a fantastic job on the piece.

Why do you think society puts people in boxes?

We have a need, as humans, to compartmentalise to a degree. We section things off in our minds in order to form a basic understanding of them. This is definitely part of the history and early acceptance of the LGBTQ+ evolution. The more familiar something is to us, the more likely we are to embrace it. But we’ve come a long way since then. I think that there are still some outdated views out there that just need a push. It’s just easier for some to stick to general stereotypes rather than look and get to know the person in front of them.

How can we break these boxes?

The only boxes I’d want broken are the ones that can be used against people that don’t want them, by people that don’t understand them. There are ways that labels/boxes can play an important role in someone’s self-exploration and acceptance of self. Millions around the world are happy and comfortable relating to certain boxes (there is absolutely nothing wrong with that at all), but not everybody is. Not every female dating females wants to be seen as gay or bi. They don’t feel as if they are gay. They don’t feel as if they’re bi. They’re just them and they’ve fallen in love with a woman. Not every guy who is experimenting with make-up is about to take the path of transitioning, nor necessarily attracted to men, nor about to make the jump to RuPaul’s next drag race. I think it’s more of an open-mindedness that is needed. So, if an individual identifies with being demisexual or bisexual and/or genderqueer, fantastic. However, if someone else simply turns around and says I’m just me, it’s all fluid, a spectrum that I roll on, then awesome! Just go live your life, be happy and don’t break too many hearts.

I have a writer’s page on Facebook, just search ‘Loz Anstey – First Draft’ and I’m on Insta under lozianstey. (Not sorry about all the cute pet instas though.)

We have also reviewed Boxes, and you can find that here. 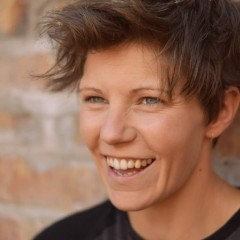 “We have a need, as humans, to compartmentalise to a degree. We section things off in our minds in order to form a basic understanding of them.”