"I enjoyed how you could really see each performer, their faces, their bodies and the environment they were performing in. It was different to theatre."

My name is Margo Roe, I am the Writer/Director of Searching For Cowardice.

What was the creative process behind Searching for Cowardice?

Searching was created as part of the BBC Arts and Arts Council England New Creative scheme in association with Rural Media in Herefordshire. This regional scheme allows emerging creatives from all disciplines to create audio, film or digital interactive projects. Having worked with Rural Media before on a short dance film NAME, I applied to the scheme with the idea to push my exploration of where narrative drama can meet with movement on-screen.

As well as working with Rural Media, the production team behind ‘Searching’ consisted of Producer Lucy Meer (Strive Productions), Director of Photography Bart Bazaz, and Choreographer Charlotte Davis. I am a huge collaborator when it comes to creating and building a project, so I like to keep an open dialogue between all of the creatives.

The project materialised after discovering Charles Penrose Fitzgerald’s ‘Order of the White Feathers’ and hearing stories of underage soldiers going to war. At the time I was gearing up to shoot my BFI short POP that explores masculinity in a working-class backdrop, so similarly the subject matter of the expectations of men became an intrigue to explore in the micro-short format. I then looked at how this would translate in today’s climate and went from there.

Having an interest in movement on film I knew this would be an opportunity to explore my interest in movement, alongside more traditional narrative. The script was a process of collaboration, I would write a scene and share it with Bart and Lucy and we would discuss the characters and narrative. The choreography came after. I find I work best when I tackle one stage at a time, so once the script was greenlit, Charlotte and I started to create the movement. Once we had the foundations of each scene mapped out, we had a rehearsal with the cast. We knew during this time we were going to collaborate with the artists to flesh out their character’s movement vocabulary and ground the movement we had already created. We had half a day to finalise the movement and rehearse before we shot the film.

What inspired your use of physical theatre-esque movement in the film?

One of my favoured films is DV8’s The Cost Of Living. The effortless flow of movement, dialogue and narrative was something I connected with and knew I wanted to explore within my work. Another artist that influenced the piece was Gary Clarke’s COAL. Gary took his heritage of growing up in a small, working-class mining village and presented it through movement. It was funny, gritty and poignant, most of all it spoke to those from the working-class community. Having a project that could cohesively mix movement and narrative and could be accessible to people who aren’t from a movement background was very interesting.

What does physical theatre allow you to do which conventional movement doesn't?

I have a constant battle between movement and dialogue. My interest of movement in film started at University when watching Anne Teresa De Keersmaeker’s Rosas Danst Rosas. I enjoyed how you could really see each performer, their faces, their bodies and the environment they were performing in. It was different to theatre.

However, the more I explored dance on film the more I felt like there was something missing – they were holding back in some way, which seems silly. It was their lack of voice, literally. I didn’t just want to see them move, I wanted to hear who they were, what they had to say. This was the turning point where I realised it was physical theatre that I wanted to explore. Give us everything; movement, dialogue, and narrative.

Why use the Order of the White Feathers as inspiration?

I had a conversation with my Grandad about serving in WWII and all of the young boys who went even though they were underage. This led me to researching underage soldiering during the Great War and onto The Order of the White Feather. There was an under generational and gender dividing pressure to be seen as ‘doing your bit’ which I believe has been thrown at youth ever since. Although the physical pressure of war thankfully isn’t at our youth’s doorstep, the monster that is social media is, which is creating a war on mental health.

I think jingoism still does exist in fractions of society, but not in the same way or extent. The world was a different place in many ways, specifically the quality of life you could expect for yourself in the lower classes. There was more of an incentive to honour your country and protect your community. In the last 100 years with the developments in technology, communication, and travel, we’ve become more internationally and culturally aware of the nations we might be going to war against.

I think it’s also worth looking at people’s sense of belonging to a country; a lot of those notions might have softened over time as people can now be whoever they want, wherever they want, figuratively speaking. Our society has embarked on a checklist of reform in the last century to bring power and rights to individuals, and with it a sense of self and individualism, or in some case self-entitlement; just look at the reaction to the Government’s request for people to go into lockdown in the COVID-19 pandemic; there were those that felt affronted that someone wanted to control freedom of choice for a greater good of a nation.

I have a website where my work can be viewed margoroe.co.uk

We also reviewed Searching for Cowardice, and you can read our thoughts on it here. 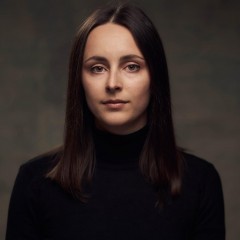 "I enjoyed how you could really see each performer, their faces, their bodies and the environment they were performing in. It was different to theatre."