Voice MagInterviewsWant my job? with Ja…

James has composed music for film, TV, and video games, alongside his job as a coordinator within Arts Award. He recently scored a film that appeared at the Santa Barbara Film Festival.

My name is James Wedlock and I compose and produce music for film, TV and games.

I am also a coordinator within Arts Award where I manage the day-to-day operations of our adviser training programme!

I am a morning person, so I usually get up around 5am and spend a couple of hours writing in the studio. I find that I am at my most creative and productive first thing, so I try to make the most of that time as much as possible.

Managing the adviser training programme for Arts Award involves liaising with our network of training agencies across the country to ensure that courses are well-subscribed to and that they have the resources required to run the course.

Despite the early start and busy day, I usually have enough fuel in the tank to fit in a bit more composing. As I am studying towards a Masters, I structure my evenings around webinars, tutorials, and coursework, leaving personal projects to the morning.

What are the parts you enjoy?

Within Arts Award, it’s hearing about some of the fantastic projects that advisers are working on with young people, knowing that they are engaging in opportunities that offer valuable life skills and prepare them for a potential career in the arts.

In music, it’s the thrill of collaborating with a filmmaker, exploring different ideas, and experiencing the film in context at the end of all the hard work.

And what do you find challenging?

Speaking to advisers who have great plans for projects but can’t necessarily go through with them due to budget cuts and financial limitations.

I frequently get inspiration for a piece of music at random and annoyingly inconvenient movements, so I find it hard to remember the idea for long enough to be able to record it. Humming a melody into my phone in the middle of a meeting just isn’t the done thing…

Why did you want to work at Arts Award? What do you think its benefits are?

I have a keen interest in arts education. As Arts Award is unlike any other qualification, I knew I wanted to be part of it somehow. It’s a great place to work, and the other members of the team are like minded as they share similar artistic interests.

With the ever-diminishing focus on arts education in the curriculum, any opportunity for young people to channel their inherent creativity and strengthen 21st Century skills must be a good thing!

Outside of Arts Award, you are also a composer. What type of music do you create?

As well as a composer, I am a guitarist and a (questionable) pianist. I have a beautiful Taylor acoustic and so love learning different fingerstyle covers. I follow this hugely talented musician called Josh Turner who does the best covers of a whole bunch of artists, so I usually go to his YouTube channel for some inspiration.

How do you balance your work at Trinity with your music work?

How did you first get into music?

When I was about 12 my parents bought me a Fender Strat and I played rhythm guitar in a couple of bands in school. I then took to composing via an assignment at A Level in which we had to compose a 5-minute soundtrack for full orchestra based on a narrative storyboard. I remember everyone in my class being fantastic instrumentalists who dreaded the composing assignments, but I was in the opposite camp.

You recently composed the music for a short film called A Glimpse, which appeared at the Santa Barbara Film Festival. How did you first get involved in the project?

This was a great film to have worked on. I first met Tom [Tom Turner, the director] in university and we have stayed connected as a collaborating partnership ever since. Tom asked me to write the music long before he even had a script, as it’s a film that he’d been wanting to make for a long time.

Can you tell us about the film?

It’s a cleverly shot and extremely well edited romantic drama about a couple who meet incidentally in a London café. We experience their interaction in the café simultaneously alongside seeing their relationship played out on screen.

The two leads, Chris and Rachel, are both excellent in it. A nice bonus was that Chris’ short film The Silent Child, also starring Rachel, went on to win an Oscar just before filming started for A Glimpse!

And what was the process like for creating the music? How hands on was Tom in guiding you?

This was the third film that I’ve scored for Tom, so I already had a good understanding of what he was looking for in music. Even so, we talked a lot about how the music should function in the film since the primary focus was on the dialogue and visuals.

I mentioned the editing aspect since there was something like a hundred and fifty edits in total, which is A LOT for a 10-minute short. For a composer, that doesn’t leave much room for music.

It’s a fast-moving film, with a lot of dialogue and scene changes etc. and I remember we stripped back a lot of the musical content because it felt that it became too busy. In the end I think we arrived at a happy medium.

When and where can people view the film?

The film is still doing its rounds on the festival circuit for most of 2020. If you’re a film festival regular, look out for it in the programme. If not, I will also share a public link to it on my social media (links below!) when Tom gives me the nod.

When composing, do you get to see the footage your score overlays, or are you given broad strokes of the scene?

A bit of both. I find it helpful to have some visuals to work with as they can stimulate ideas immediately. I can try something out and if it doesn’t work then, bin it. This works well when a scene has been locked. I can write freely knowing that timings won’t change and then it’s just a case of making revisions until the director is happy.

When I compose to storyboards or a script it allows the director/editor to cut the film around the initial demo ideas if they’re still suitable.

What is the next project you’re working on?

I’ve been itching to release an instrumental album for quite a while now, and so I’m working on several pieces for that. I’m a huge proponent for the need to address climate change, and so the album is heavily influenced by current feelings about the state of the world – good and bad.

I’ve got a couple more film projects scheduled in and a production music album. I’ll also be working on a feature length soundtrack for my master’s which will be equal parts exciting and terrifying.

Are there any musicians you take inspiration for?

Thomas Newman. In fact, the whole Newman dynasty. Their contribution to the world of film music is just incredible. All of Thomas Newman’s scores excite me, and he has such a natural sensibility in communicating specific emotions through music.

Christian Henson from Spitfire Audio is a true musical trailblazer in the industry. His YouTube channel is full of tones of great tips for the modern-day composer. Plus, Spitfire samples are just incredible!

Oh, and the melody-maestro John Williams… if that even needs to be said.

Who would be a dream collaboration for you?

Hmm, working with Pixar to score the music to one of their ingenious short films. They are always incredibly imaginative, playful, and emotionally driven, and I think part of the reason they work so well is down to the music and sound.

What message would you give to 16-year-old you?

There’s more to composition than Bach, wind quintets and counterpoint…

Also, stick at piano – it gets easier.

And what would you tell people who want to follow in your footsteps?

Be as open-minded and experimental as you can but never lose sight of what you enjoy about writing and making music. Make as many friends in the industry as you can as you never know how your paths might cross in the future.

Be patient, persevere, and practice. Morricone only just retired a few years ago at age 90…

Write every day. Composing is like a muscle to be flexed in the same way as playing an instrument.

Say yes to any opportunity that comes your way. You can figure out how to do it later! 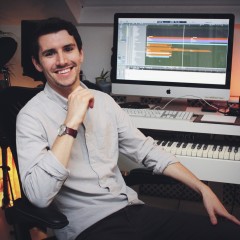 James has composed music for film, TV, and video games, alongside his job as a coordinator within Arts Award. He recently scored a film that appeared at the Santa Barbara Film Festival.