"The crux of The Girl With Glitter In Her Eye is about the validity of voice and what it means to have a voice removed, echoed both in my personal life and the political landscape."

Yes, I can. Hey there, I’m Masha Kevinovna. I’m a writer, director, creative producer and Artistic Director of OPIA Collective.

Describe The Girl With Glitter In Her Eye in 3 words.

What is the premise of the work and what inspired it?

The show is about a complex, female friendship between Helen, an artist struggling for recognition, and her best friend Phil. We watch their relationship unravel following the revelation of a personal trauma and subsequent betrayal of trust all told in our trademark multidisciplinary style!

The conception of the play began during my time at Epic Stages, National Youth Theatre in 2017. My course was led by the indomitable Sabrina Mahfouz & Rebecca Frecknall, I was deeply inspired by them and the ensemble of phenomenal women I was working with.

I desperately didn’t want that to end, so started scribbling the first draft during rehearsals, my aim was to create a show that showcased women & female friendship in a multifaceted way.

We were developing the play in the midst of the #metoo movement early in 2018 which naturally influenced the rewrite of the play, becoming a direct response to what was happening around us. As the other artists and myself began to develop the show further, we realised that the crux of the story was about the validity of voice and what it means to have a voice removed, echoed both in my personal life and the political landscape.

What is OPIA Collective?

OPIA Collective is a company of female/LGBTQ artists whose strengths lie in various art forms such as filmmakers, writers, performers, poets, musicians and dancers.  We have a unique and shared goal to create multidisciplinary work that brings a true, realistic and authentic representation of the female & LGBTQ experience.

How did you go about combining different art forms such as spoken word, live music, and theatre?

Spoken word, poetry, movement, music, visual art are all different ways to tell a story. Usually I would start with the script of the structure of the story: everything hangs from the structure, it’s your foundation for the piece.

I would then go through the structure and see what sections can be best told through music, movement, visual art or poetry or whether adding music to the text will elevate and support what’s happening at that moment. A lot of these discoveries are made naturally in the rehearsal room, playing around with different mediums and finding which one resonates or supports the feeling we want to express within that moment.

It’s often led to text being cut because music & movement conveys the meaning of that moment much more eloquently than words ever could. It’s really exciting as I believe through crossing art, you’re able to connect to a variety of people. One person might relate more to prose whilst another might be more moved by musical elements in the production.

Did you face challenges in the creative process when trying to approach difficult subjects such as rape culture and consent?

So far we haven’t had any major challenges but due to the incredibly triggering nature of these themes, we do have to be careful. We have check-in and check-out sessions at the start and close of every rehearsal to make sure the performers are feeling comfortable and safe.

We are also incredibly lucky to be working alongside Maya Centre a charity that helps women who have experienced trauma in the form of domestic violence, sexual or physical abuse. Whilst being able to promote the fantastic work that they do, we are also putting precautions in place for any audience members who might be triggered by the shows themes. We have a Chill-Out zone in the foyer and a post-show discussion space.

Have any particular artists influenced The Girl With Glitter In Her Eye?

I recently worked with Sabrina Mahfouz and Stef O’Driscoll on a production of A History Of Water at the Royal Court - it was so eye-opening to work with these artists and I was inspired by their nerve, discipline and honesty!

Pina Baush for her stunning movement; Arinze Kene, Lucy Prebble, Alexander Pushkin, Oakley Flanagan for their glorious writing, FKA Twigs album MAGDALENE was what I had on repeat whilst I was writing. Beyonce will forever be my muse and also my mum Svetlana Waring.

I still ask myself how I got into the arts! Yes, I still work at a shoe shop as unfortunately art doesn’t pay the bills quite yet! I’ve worked there since I was 15 and it’s a running joke there that I’m now part of the furniture.

Everything seems to have merged together - there hasn’t been a clear trajectory of ‘hey, now you’ve got an art job’. Instead, it’s been lots of little projects and occasionally big projects that started to carve a career.

I also met incredible artists who are now my peers, friends and creative support network. This was the best jumping board and has been invaluable. From there, I founded OPIA Collective, and started creating work, collaborating with my peers in creating stories that we vibed with and wanted to see.

I’m definitely starting to see a change in the Gatekeepers of the industry. Having people like Chris Sonnex and Linette Lynton in charge is exactly what the industry needs right now. The work they are programming is fantastic as well as socially and politically important, and it’s exciting to see artists not traditionally given a space in the theatre, be presented with opportunities to work with some of the best venues in the country!

I’m still figuring it out, but that’s a well-known fact - life is forever about figuring it out! There is no set way into becoming an artist. No rule book to follow which makes it all the more exciting, but here are a few tips that could potentially be helpful.

If you’re under 25 I’d definitely apply for all those 18-25 opportunities and programmes! There are many free ones such as Young Court (Royal Court), Lyric Young Company (Lyric Hammersmith), Ovalhouse, Almeida Young Company (Almeida), Soho Theatre Young Company, Roundhouse Young Creatives, Theatre Royal Stratford East, National Theatre (Entry Pass), Young Associates (Gate Theatre), HARTS Theatre Company and National Youth Theatre. These have been my training ground. As someone who hasn’t had the privilege of studying at drama school or having a family member with connections in the industry, it’s where I’ve met my peers and mentors. The people that you learn and grow with are invaluable.

Trust in yourself and know that you can bring something special to the table and your voice is valid. No one can be you.

Don’t be afraid to reach out and ask for help. I wish I had got over my fear and pride a lot quicker, people are more than ready to help out, advise and give you a guiding hand!

Check out Bunker Theatre’s website www.bunkertheatre.com for further info about the play and to buy tickets and our website www.opiacollective.co.uk to read more about what we do!

Follow us on social media @OpiaCollective for regular updates, an insight into rehearsals and future OPIA events. 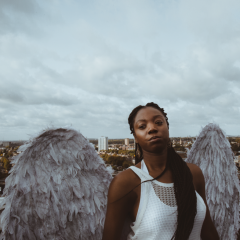 Don't wait for permission, create your own work instead says Masha Kevinovna

"The crux of The Girl With Glitter In Her Eye is about the validity of voice and what it means to have a voice removed, echoed both in my personal life and the political landscape." 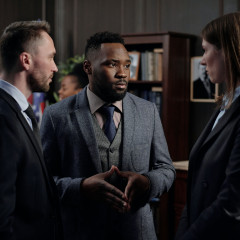 How to have your voice heard at the G7 summit