"We’re all environmental hypocrites, none of us completely understand what it is to be someone else and we’re all scared of saying the wrong thing. The best way to burst that awkward bubble is to show your flaws and still try."

Hi Laura! Could you first introduce yourself to the reader?

Hello! I’m the second eldest of four siblings with a desperate desire for attention and adoration. I like mulled beverages, my allotment and those pictures where the guy makes animals look like kids drawings of them. My main flaws are jealousy, anxiety and losing inter

What inspired you to create this show?

I like making people laugh - that’s my main thing. But, if your job is making people laugh and it’s all you do every day, even that can feel a bit thin sometimes, so I suppose with Knee Jerk I wanted to make something with a bit of a purpose? So I could look back and think “I tried to make the world a nicer place”.

You tackle several big issues in “Knee Jerk” such as social media, mental health and climate change. How did you go about addressing these with comedic effect?

I aim for honesty so that it’s coming from the middle ground. We’re all environmental hypocrites, none of us completely understand what it is to be someone else and we’re all scared of saying the wrong thing. The best way to burst that awkward bubble is to show your flaws and still try.

Tons! I have always been a huge fan of Eddie Izzard. I also love Zoe Lyons, Sara Pascoe, Adam Hess. I love their lightness of touch.

What challenges did you face when writing “Knee Jerk”?

Narrowing it down to a vaguely coherent set of subjects was tough… As soon as I started writing on any topic I’d think of a heap more I wanted to explore and then it got a bit wild and woolly for a while. It’s hard to be strict with yourself and say “leave that for the next show”. It’s also really hard to make Brexit funny without slagging someone off so that was a challenge.

How did you get into a career in comedy?

I accidentally did a masters degree in stand up comedy and it all fell apart from there.

Have you noticed any changes in the arts industry? If so, what?

Oof, that’s a huge question. Yes, I think there have been a lot of changes, but it’s hard to measure. To notice a “change” I think you have to assume that things used to be fixed, whereas I think industries are in a permanent state of movement.

I feel like a thing I would like to see changed in comedy is all the chasing the “new” and the “fresh". It felt like when I was younger, comedians became great on the circuit and gradually worked their way up to a place of prominence, now it feels more and more like brilliant comedians are ignored because they’ve “been around a while”. So what? If it took them that long to quietly get good, well done to them - now that they are good, use their talent.

Tell us – can you really solve the gender pay gap with netball?

Yes. Chuck it in the bin and teach everyone football.

You can buy tickets to see Laura here. 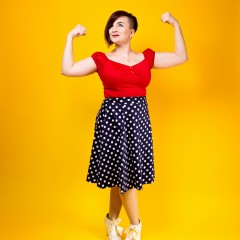 It's hard to make Brexit funny without slagging someone off, says comedian Laura Lexx

"We’re all environmental hypocrites, none of us completely understand what it is to be someone else and we’re all scared of saying the wrong thing. The best way to burst that awkward bubble is to show your flaws and still try."