"The 90s was very much a place where disabled people could only survive and never aspire to anything more."

I am Neal Pike: a poet, performer and theatre-maker based in Nottingham. I started writing in 2013 after life got a bit awful. I’ve always had a wish to be on stage but thought that would be through music, though I can’t play an instrument or sing! When I joined Mouthy Poets, I thought - hang on, I really enjoy performing these words I’ve strung together.

What is the premise of “Five Years” and what inspired this work?

Five Years was inspired by my time at an S.E.N school in the nineties. It wasn’t great, but I also wouldn’t be here without it, because the experience taught me to survive in this world. But it taught me only to survive. It’s about Nottinghamshire as a whole, from villages to small towns to big cities. It’s about friends. It took me a long time for all this to come back into my head.

Please tell us more about how you approached topics such as disability and identity, and how you found the creative process.

My writing style is very scenic and punky so finding a word or a memory and writing to record is how I go about everything I write. I didn’t really know what I was doing at first, so many of the first drafts were very flowery and metaphorical and didn’t really work as a play. I am aware this is a controversial topic but I don’t really care: I can write because it happened to me.

You said, “Being told you can’t do something because you’re special and you will be forever known as special always stuck with me.” Please describe more about how this impacted you, and how you talk about it in the show.

The 90s was very much a place where disabled people could only survive and never aspire to anything more. Most places I went, I was introduced like, “this is Neal, he is dyspraxic and he is very clumsy, he has a stutter, he has learning disabilities, he’s a bit thick.”

If someone tells me I can’t do something, I’ll do my best to prove them wrong. I went rock climbing and abseiling from a fairly early age. My parents were always asked, “Why are you letting Neal do these things?”

And they answer, “Because he’s his own person, he will decide what he wants to do”

Why did you decide it was time to create and perform this show?

From very early on when I was writing, I always wanted to write this story. I was told not to by a writer as I was too new to this, but it made me want to write it even more. At an Arvon writer’s course in 2015, Jess Thom’s guest session made me feel like I had permission to write about this. It was a very long four years but I loved most of it.

Did you face any challenges during this project?

Just how painful memories are and how hard it can be to perform those memories every night. I don’t regret writing those early drafts, but it wasn’t going to work live and it wouldn’t have been fair on the audience either.

Jess Thom on Five Years especially as hearing her talk about her work as an artist gave me permission to write about being disabled. Dusty Rhodes was a wrestler with a lisp and has some of the most convincing promos I’ve ever heard. CM Punk has this ‘no shit I’m going to look at you and speak right in your face’ style of speaking. I don’t really like eye contact.

Richey Edwards, Jacob Bannon, Jeremy Bolm inspired me to pursue pure catharsis and that punk energy of just getting stuff done, no matter how hard it is. One of my closest friends, and a great poet, Jim Otieno-Hall helped me to write.

Shane Meadows’ work, especially This is England, really helped me map out the plotting for Five Years. The surreal side of my writing is definitely influenced by Monty Python.

Don’t bottle up things till you’re nearly 30 - it won’t help at all.

Tell us about Tentacles.

Me and my friend Maresa Mackeith, a fellow disabled poet, were discussing why there wasn’t a disabled writers’ collective in the UK, and so we started working on one. The aim is to have lots of little bases around the UK focusing on poetry and networking to help disabled writers have a mentoring base. We are currently working on a two-city relaunch for spring 2020

How can people find out more about your work? 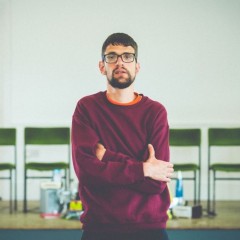 "The 90s was very much a place where disabled people could only survive and never aspire to anything more."