Sidra Hussain was a junior Orwell Youth Prize runner-up in 2019, responding to the theme ‘A Fair Society?’.

I was inspired to write this piece because of two primary reasons – the first being my political allegiance to the Labour party. The Labour party believes in socialism and equality and my piece highlights there’s not enough of these values in our society. You always hear on the news how there are more and more people who are living on the breadline, but what’s being done to fix this on-going issue? Not much at the moment considering Brexit is the government’s priority at the minute. Furthermore, in our society today, wealth equals power and privileges. This is the root cause of corruption as it enables the wealthy to skirt around laws and punishments which leads to inequality. The second reason I chose to write this piece was because, in recent years, knife crime has become more prominent in society. It is always horrific to hear about loved ones lost to knife crime and I felt like more awareness needed to be created on this issue. Therefore, I chose to write about it because the written word is a wonderful way of getting a message across.

Why did you pick the form you did?
The reason I chose the format of a fictional story was because characters are easier to understand and sympathise with rather than cold, hard statistics. As an avid reader myself, I can appreciate the beauty of a well-developed character that the reader feels an inexplicable bond with, and I was hoping to recreate that in my work. Knowing someone – the protagonist – who has experienced the problem makes it easier for us to understand how brutal the effects can be as it puts everything into perspective.

Reading is my favourite pastime and translates over into my love of writing. I feel it is easier to express myself with a pen and notepad, whereas some find that contentment with a sketching pencil or paintbrush. The most important aspect of writing for me is the characters because they are the ones that make the storyline. It’s their lives that you’re reading about, so you need to feel an emotional connection to them. I love creating characters and sharing their stories with others: I can express myself through the words, actions and choices of these characters, created from my imagination.

My advice to fellow writers would be to write about something that truly resonates within you because your passion will shine through your words and make your work all the more enjoyable for others to read. Also, don’t worry about conforming to ideas and literary expectations because it makes your work unique. Finally, read as much as you can because it will expand your vocabulary; teach you new and random things, and influence your creativity.

What's a piece of writing/poem/novel/article/film that has influenced me
There are two pieces of work that influenced my entry. The first is a beautifully written novel by Afghan author, Khaled Hosseini. ‘The Kite Runner’ is an extremely emotional book with many inspirational messages. The message that most influenced my work was the divide between rich and poor and how it can affect one’s entire life. The other piece that influenced my work, was a letter written by the acclaimed actor Lennie James about knife crime. The letter was very expressive and written in such a way that it was impossible for the reader not to be engaged. I thought his message to knife carriers was eye-opening and certainly left a lasting impact.

You can read Sidra Hussain's entry to the Orwell Youth Prize, Equal Importance, here on Voice. 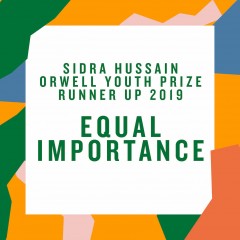 Sidra Hussain was a junior Orwell Youth Prize runner-up in 2019, responding to the theme ‘A Fair Society?’. 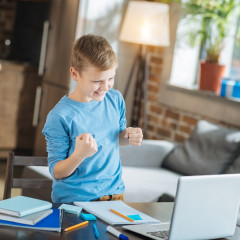