Theo Burman was an Orwell Youth Prize Senior Winner in 2019, responding to the theme ‘A Fair Society?’. We asked him where he got his inspiration for ‘Why Did You Organise the Protest?’ and what motivates him to write:

We talk a lot in western politics about the importance of meritocracy, and for the most part, it’s seen as a core value of our democracy. The problem I have with this view is that it’s very hard to define “merit”, and far too often, it’s interpreted as just intelligence or education. While reading up on John Stuart Mill’s idea to give additional votes to those with a university education, I began to imagine what a government elected this way would look like, and the rest of the story built itself from there. My goal was to propose a less one-dimensional view of meritocracy, one made up of experience and wisdom, not just knowledge and paternalistic concern.

Why did you pick the form you did?
I briefly considered writing the story as a play, but I realised that form wouldn’t have allowed me to put in the necessary exposition at the beginning, because it’s delivered in a character’s thoughts rather than their words. The actual premise of my story is a bit awkward to explain, so in a first draft I just wrote down exactly what I meant it to be without any spin. That turned out to be a pretty effective way of explaining the background the plot, but it could only have worked as a short story.

Why do you write?
I think it’s because of the history behind writing, particularly in political spheres. Because of the incredible pieces of writing produced by the philosophers in our history, writing is widely respected as a method of political discourse, and I suppose it’s that history that I want to be a part of while writing. Thanks to people like Orwell, that discourse can be set in both fiction and non-fiction. In the same way that the paintings of Da Vinci and Michelangelo have inspired countless artists to pick up a paintbrush, I like to think that there is a new generation of writers picking up a pen. Political writing is now an art, and part of me wants to be an artist.

What advice would you give to fellow young writers?
Commit to an idea and see it through. It’s very easy to come up with a brilliant idea, write the first half, and leave it for a bit before starting something else, only to find that you’ve lost interest in the original idea and want to work on something else. Working on one piece of writing at a time helps you focus in on the details. It can be tempting to branch off and explore a bunch of different ideas, but this spreads your attention across several different projects.

A piece of writing/poem/novel/article/film that has influenced you
The film I, Daniel Blake has quite a hold on me. My main take away from it was the importance of balancing your message to the audience with a compelling narrative. The greatest works of political fiction have always had intriguing plots that hold up on their own, even when the political context is removed, and this film helped me realise that. The writer who has influenced me the most is Roald Dahl, specifically through his collections of short stories. There’s such a wide variety to the themes and topics he explores, and they show how useful internal narrative can be in providing exposition, especially in a form as cramped as a short story.

You can read Theo's winning short story, Why Did You Organise the Protest?, right here on Voice. 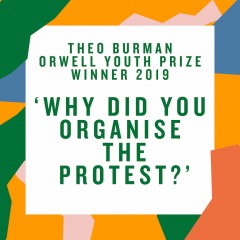 Theo Burman was an Orwell Youth Prize Senior Winner in 2019, responding to the theme ‘A Fair Society?’. We asked him where he got his inspiration for ‘Why Did You Organise the Protest?’ and what motivates him to write: