Voice MagInterviewsWant my job? with Al…

"The arts industry isn’t going to be as easy as moving to London and auditioning at a drama school, but there are people out there who want you to succeed."

My name is Alexander Grieve I’ve been a freelance theatre professional working in different aspects of theatre including theatre technician, venue manager, box office and front of house manager.

I also perform and produce under the guise Awk the Clown, a lonely clown who performs at cabaret nights and with the one clown show ‘All Work, No Play’. We’re next coming to the Stockwell Playhouse from the 14th of October to the 17th.

Depending on the job the day changes. Currently, I’m producing my own show so the day will usually start with programming social media for around an hour. Next is sending a load of press releases and invitations to companies and theatres with whom I’d like to share my work. Then perhaps hour of existential fear about whether or not the work is good enough - this is also known as my break.

I’d round off the day doing something creative: editing, making content for social media, or taking a look over current scripts or writing new work. It ends the day on a high, although the vast majority of the work is admin I think it's always important to spend time on your art.

What’s great about any job I’ve done in theatre is the opportunity to help and enable theatre to happen, which above all makes people happy. The joy of managing a venue is allowing every company theatre company, no matter what stage they're at, the ability to make theatre, whilst encouraging other staff members along the way.

As my clown Awk, I am able to play with a range of emotions with the audiences. I believe that all emotions are important, whether positive or negative. Being a clown allows me to express and explore those emotions, sharing that wonderful spectrum with an audience. We all can’t be lonely if you are in a room sharing that emotion together.

Finding work can be quite difficult as a freelancer working in theatre. I think the most important thing is perseverance and knowing that as hard as the arts industry can be, people want you to succeed. Like most people in this industry I’ve had my fair share of rejection. For example, out of a hundred applications or press releases sent off only a handful will have replied let alone been successful.

However I’ve also been lucky enough to work with some amazing people throughout my career who have given me opportunities to succeed in this industry. Without them I wouldn’t have been able to get as far in theatre as I am now. I’ll continue to make new friends along the way as well and offer opportunities and advice to anyone else who wants it.

Sometimes career highlights come in surprising ways. Of course you have career milestones such as becoming operations manager of a Fringe venue, or something as small as selling your first ticket to your very first show.

Other times they come in smaller ways, such the silver lining moments that make you remember why you do the job you do.

During my Edinburgh Fringe run of my current show ‘All Work, No Play’, I only had one audience member. This happens especially in Fringe theatre, but it is always important to remember that that one person has come to see your show, no matter if your performing in front of hundred or thousands. That one person has paid and wants to see the show; you have the power to change their day/life.

However, having one person in the audience isn’t exactly the easiest thing to overcome. My show is interactive, as most clown shows, and this audience member was understandably quite nervous as the doors closed and a miserable looking clown ran through the door.

This person also sat on the back row, which Awk was not going to allow, so Awk swiftly took her hand and sat her on the front row. Awk made several jokes early on which mader her feel more relaxed, so after the show she hugged Awk. It may have been the best show Awk’s ever had. Alexander agrees.

I always tell people I got into theatre by accident.

Whilst I used to be very keen into footabll when I was younger, I got a bad injury where I had to stop playing. As both my older brother and younger sister’s main interest at the time was theatre, I’d thought I’d give that a go.

In truth I always wanted to pursue theatre, but not always in a creative or backstage role. I wanted to go to a theatre school to hone my craft as an actor, but due to lack of funds I couldn’t afford to audition or travel to a school I wanted to attend.

Instead, I took the mindset that if I wasn’t going to a top-end drama school, I’d teach myself how to make theatre. I went to the University of Hull where I learned a multitude of skills including the technical aspects of theatre, lighting and sound, stage-management and a little bit of costume,

During this stage I discovered my love for clowning. Like most people, at first I thought it was just circus skills juggling, putting on a red nose and acting like a buffoon, but then I watched Slava’s Snowshow and was blown away with the beauty of it all.

When I left university I did what most people do with a drama degree - I moved to London and worked as a waiter. Slowly and with a lot of effort, I began to pick up theatre work and haven’t looked back since.

This is a challenge I’m still learning how to overcome and will continue to learn throughout my career in the arts. The challenge is how to deal with rejection.

Throughout my career so far this has occurred a lot. Manyf times you look at other people and think, why are they doing so much better than me? Or, why have I not been given the same opportunities that others have? However, the most important thing for myself is to stop envying other people, to talk to these people and remember that we are all here to make theatre and support each other.

Another thing to do is to keep going and remember that what you are doing is important and there is a place for you in this world. It may not be easy, but I believe that if it’s important then it shouldn’t be easy.

I’ve worked at the Edinburgh Fringe for the last 5 years now. It’s a beautiful place where all my friends are in one place for one month of the year, doing what they love.

However, I feel there is a risk that the Edinburgh Fringe, due to its growth, is even more oversaturated than in the past. With the growing number of companies, the Fringe and the city of Edinburgh lacks the resources to support artists. It seems harder than ever to get your show seen.

The Edinburgh Fringe can be a life-changing experience, but that doesn’t mean it’s the be-all and end-all of theatre

Ask for help, and ask to help more. The arts industry isn’t going to be as easy as moving to London and auditioning at a drama school, but there are people out there who want you to succeed.

Reach out to people, whether that’s other theatres companies, or your school or university for advice. Don’t stop wanting to learning about everything in theatre. If you listen as much as you can and are not scared of failure, you will learn very quickly.

"All Work, No Play" will be at the Stockwell Playhouse from dates 14th- 17th October.

You can find out more about Alexander and Awk at @AwkTheClown #AllWorkNoPlay on social media. 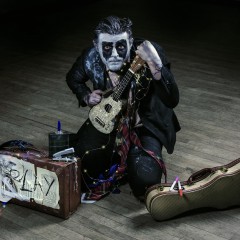 "The arts industry isn’t going to be as easy as moving to London and auditioning at a drama school, but there are people out there who want you to succeed."