Voice MagInterviewsWant my job? with Ta…

"I was working in the NHS as a manager for many years. Theatre was something I occasionally participated in, but wasn’t a big part of my life."

I’m a Theatre Director, currently working as Artistic Director and CEO of Battersea Arts Centre. Feels like the best job in the world. Though born in Sunderland I grew up in the Middle East and came to England when I was 17. I think I still have traces of a foreign accent which gives that away. I had a very American twang in English when I first moved here.

There is no typical day which is what is brilliant about it. But generally, lots of meetings, both with team members and external partners. So conversation is the bulk…  talking things through, bouncing around ideas, making decisions where needed. I’m not at the desk very often – when I am, it is a time to desperately catch up on emails!

That every day is different and you never know what is going to happen next. The inspiring people I work with – the team at BAC and our creative collaborators are just a remarkable bunch. Much of the role is about management, but when looking at programming then you also get to discuss themes and ideas that are either very present or very universal, so the job is endlessly stimulating.

I am a bit shy so doing panels and networking can sometimes fill me with dread. Also, the diary is generally completely packed so maintaining energy levels can be tricky. Finally, there’s a lot I don’t know or am unsure about – but having good people around you really compensates for that.

Helping found the Yard Theatre in Hackney – I’m really proud of what that venue has become. Getting the National Director for Theatre job at the Arts Council – that was a big step up for me. But my real personal highlight was directing my first show in a tiny fringe venue in London. The first night we had three audience members, but by the end we were selling hundreds of tickets per night and kept extending the run. Such a great cast and creative team – that was very special to me.

I came to theatre by accident. I was working in the NHS as a manager for many years. Theatre was something I occasionally participated in, but wasn’t a big part of my life. But I got cast as an extra in a show at the Barbican (long story) and found myself on stage for three months with actors like Fiona Shaw and Simon Russell Beale and Ralph Fiennes. Seeing them and the director Deborah Warner work was incredibly inspiring so I decided I would become a director. In order to pay the rent I worked two careers for many many years. It was gruelling but so worthwhile. But none of it was ever planned – I’ve just always tried to do the most interesting and useful thing I could do at the time.

There were definitely some low points with getting theatre reviews. One piece of work that was challenging and very personal that I wrote and directed got terrible reviews – and that moment was devastating, as I had put so much into it. Also the feeling that I was doing lots but no-one in the industry knew me – I was a nobody and had no contacts and no connections. I actually gave up theatre a few years ago as I was finding it too hard to make a living. But I then decided I couldn’t live without it, saved up some money and gave myself another six months to make it work. Then I got one theatre job, then the Arts Council job, then the BAC job and it was just an incredible rollercoaster. But every career has some real low points – the trick is finding a way to stay in it and stay positive.

It’s more inclusive and representative. It’s no longer about the ‘vision’ of the Artistic Director – cultural leaders are now asking themselves how they can best serve the creativity of the communities and artists they work with. This is such a positive step. But on the negative side we are becoming more isolated as a cultural sector from what is happening in other countries – international exchange is just so vital. And it is still very hard to make a career in this sector without financial backing or support – and that needs to change and quickly.

Everyone will have lows and their own challenges so don’t compare yourselves to others. Enjoy the journey and do the best you can at that moment rather than think you need to be here or there by any particular point in your career. There are always people willing to help – so don’t be afraid to ask.

You can absolutely do it if that’s what you want. Five years ago I never would have dreamed that I could be in this role. I always thought I was an outsider, that I wasn’t qualified enough, that I didn’t have the right contacts or background. But everything is possible. Don’t let people pretend that ‘luck’ comes into it too much – it’s almost always down to hard work in the end. If you put the effort in, that will pay off in the long term.

But also I don’t see being an Artistic Director as the be-all or end-all. There are so many great roles and jobs in the cultural sector, all of them valid, all of them rewarding, all of them different. Find the right one for you by trying as many different things as you can – that’s really the best job in the world.

Tarek Iskander will be participating in an ‘Ask Us Anything’ panel session at TheatreCraft 2019, the free offstage theatre careers fair for 16-30-year-olds which takes place on Monday 11 November at the Royal Opera House. To sign up for your free place at TheatreCraft and find out more information about the day, visitwww.theatrecraft.org 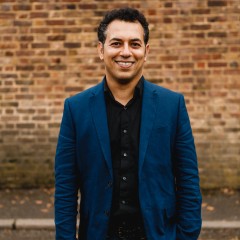 "I was working in the NHS as a manager for many years. Theatre was something I occasionally participated in, but wasn’t a big part of my life."