Comedian Jack Tucker (in no way related to Zach Zucker) is the ultimate hack comedian, and takes the time to - just about - answer some questions before his run at the Soho Theatre.

Hello Europe!!!!!! Hello, my name is Jack Tucker, I am a stand-up comedian from New York ‘The Big Apple’ City and I have been doing stand-up comedy for forty five years. I’ve been performing on the Upstate New York regional comedy circuit for a while, but I am ready now. My wife and I recently separated – but I’m still wearing the ring, so don’t tempt me ladies!!!! But in all seriousness, she did leave me and I haven’t seen my boy Joe for a few weeks.

Why did you first get into comedy?

Asking Jack how he got into comedy is like asking Lance Armstrong why he cycled to the moon. He’s got racer’s legs and I’ve got the joker’s mouth. What I’m saying is, comedy chose me and I will win the race.

Who do you take inspiration from?

For England, I’d have to say Michael Macintosh. Not only is this guy super freakin hilarious, he invented the iPod computer station. I love listening to music and my favorite song is, Who Let The Dogs Out by Baha Men. This song was monumental. Did you guys know that the “dogs” in Who Let The Dogs Out aren’t a reference to the Baha Men themselves but in fact rude and unruly gentlemen who behave like “dogs”? Really makes ya think…

Why have you decided to branch out from the Upstate New York comedy circuit?

You know I only heard about United Kingland this year, so this is new territory for me. It’s also my first time leaving the country (I love USA!!!) but I’ve always wanted to go to England and meet this Big Ben fella!!! In America we’ve already got a guy called Big Ben and his name is Ben Roethlisberger. He’s 6’5, 240lbs and the quarterback for the Pittsburgh Steelers. He’s a two-time Super Bowl champion, and a pillar of the NFL Football Community. So it would be pretty hard to be bigger than him! haha but we’ll see! 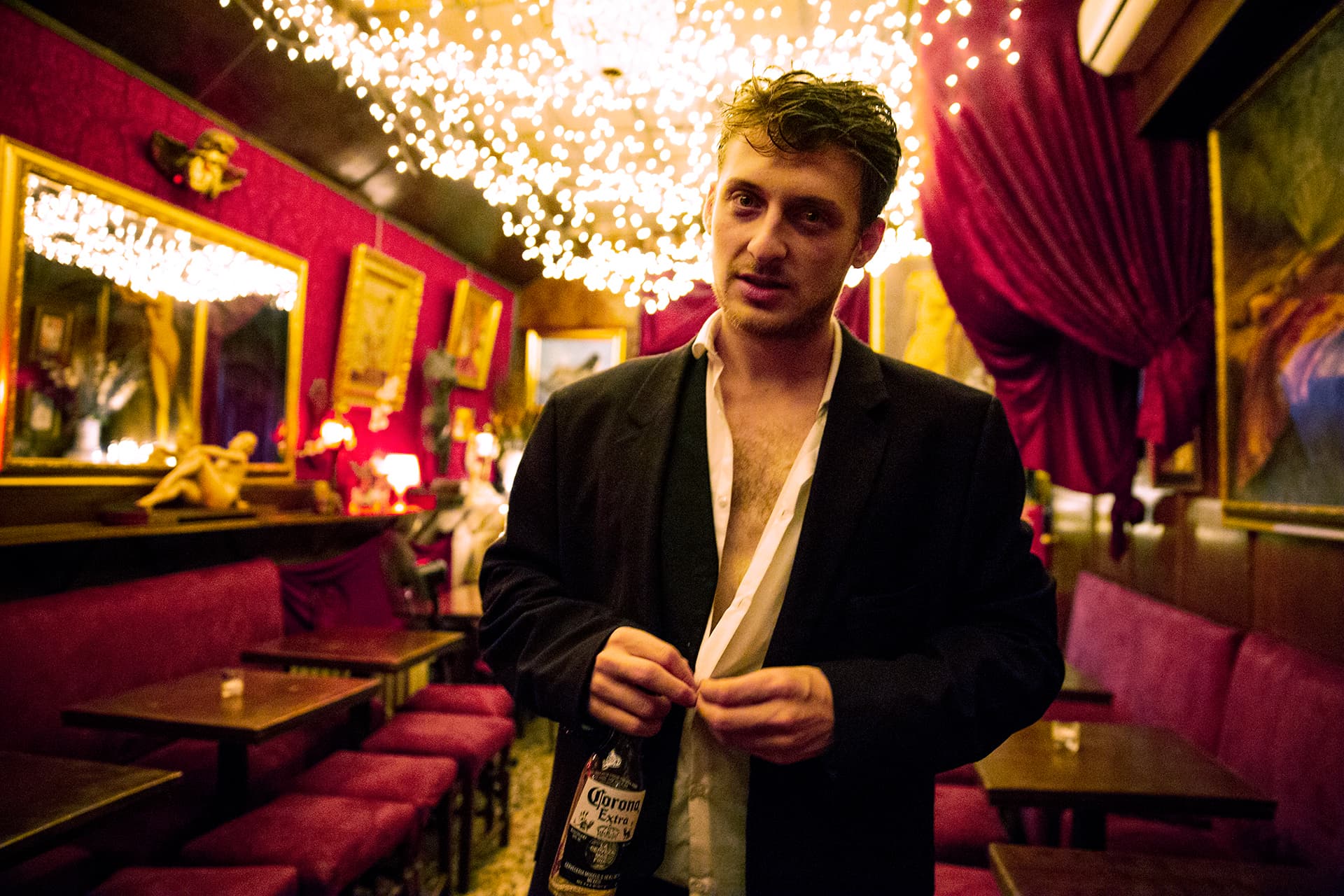 You recently separated from your wife. Has that event influenced your comedy at all?

I don’t really like the word separated. I mean just because she wants a divorce, doesn’t mean I want a divorce. I thought this was America not dictatorship Russia!!!  Yes, I signed legal documents that (allegedly) say our marriage is no longer official. Yes, she has a new boyfriend named Dave. Yes, I am still living in their garage. Yes, I hear them make l*ve at night. But, NO, I am not a communist and YES I love the red, white and blue!!!!!!!!!! Support Our Troops!!!!!!!

How does travelling impact your relationship with your son? Does he know what you do?

I love my boy Joe, he’s a great kid. I haven’t seen him for a few weeks and I’m worried about how this is affecting his development. He’s still a child (19 years old) and I’m worried he won’t get a chance to love his dad the way my audiences love me. After I win the best comedy award, my plan is to buy my son season tickets to the New York Yankees so he and I can go to all 81 home games together.

In a previous interview you said you eat burgers everywhere you go – where’s the best burger?

The best burger I ever had was down in Upstate Manhattan from a local meat shack run by a man named Meaty Bill or Billy Meatballs for short. What made this place so special was the way they prepare their beef. This wasn’t like one of those awful hipster hangouts, with their “rare” meat. I mean how rare can it be? Every restaurant has it! This was an authentic meat shack. The chef cooked the hell out of that meat. I’m talkin’ 45 minutes in the pan, MINIMUM. That’s how you make a good burger.

It was your first time in Edinburgh this summer. How did you find it?

Ya know I only heard about the Edinburgh Fringe a few months ago. I didn’t realize there were so many shows :( This was my first time leaving the country (USA) and I wasn’t sure what to expect, but when I heard there was a 10 thousand pound prize, I was like “I gotta see this thing!” I mean how big must that trophy be if it weighs ten thousand pounds! Wow!!!!  That’s freakin huge !!!!!!! Never got to see it though :(

Do you ever worry about being upstaged by your director, Jonny Woolley?

I’m not sure who this guy is but he’s really starting to tick me off. He keeps adding these sound effects to my show and I don’t want them. I don’t know who he is, but I think he’s been sent by somebody else to keep an eye on me. I keep tryna lose him, but everywhere I go, he’s there. If anyone knows anything about this man, please call 847-433-0422.

Do you ever read the reviews of your show, or change anything based on feedback?

People have previously walked out of your show. What gives?

People never walk out of my show. Who would do such a thing? Hey what type of interview is this anyways? I want to talk to a lawyer. Somebody call my lawyer. You have the right to remain silent, this is a citizen’s arrest!!!!

You’re soon to be doing a run at Soho Theatre - how did that happen?

I was scared about this gig actually. Not sure if you know this in Great Kingland, but Soho is an “artsy” area in Historic New York City full of a buncha hippie jerks. I’m talkin the worst of the worst. These punks all smokin their nicotine-free tobacco vapes, alwaays playin super mario bash on their smart phones, and everybody’s havin sex with each other because they’re all “open to new ideas”. Real scum of the Earth these guys! Luckily Londom has class so I foresee no problems with the liberals in your Soho District.

Is there anything you do to prepare for a show?

I look in the mirror to make sure I’m still me. Then I call my son (847-433-0422) to see how he’s doing, but my wife (technically my ex-wife) picks up the phone. I’m stunned. Nervous, I ask her if she still loves me. She says no, but that she cares about me and will always support me. My heart rate begins to come back to normal. Then I hear a voice in the background. It’s her new boyfriend, Dave. I seize up, throw up and hang up the phone. Next thing I know, I’m onstage and everybody loves me. Sometimes I feel like the audience is my wife. Well, my ex-wife. Take that Dave!!!!!!!! hhahahaaAhaha!!

What advice would you give to young people who want to emulate your success?

My best advice to young people would be to do exactly what I did and everything will be fine. I made the right decisions over and over again. I made the right jokes, I chose the right woman, and I slept with the right people. Yes, I am going through a divorce. I made such a consistent streak of good decisions, the other comics started calling me Lucky Jack. Not sure if this translates to English culture, but in America we have these things called decks of cards. Traditionally there are fifty-two cards in pack, and one card in particular is called a Jack. You’re not gonna believe this but historically this card is known as a lucky card. How crazy is that? You can’t write this stuff!!!! Good luck kids!

We previously reviewed Jack Tucker: Comedy Stand-Up Hour, and you can read what we thought here.

Tickets for Jack's Soho run can be purchased here. 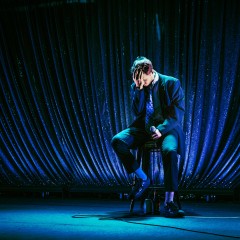 Comedian Jack Tucker (in no way related to Zach Zucker) is the ultimate hack comedian, and takes the time to - just about - answer some questions before his run at the Soho Theatre.