"Being raised in a very deprived, working-class estate, you’re led to believe that these things just don’t happen to people like us."

My name is Nadine Rose Johnson, also known as Glitch on stage. I’m 23 years old and live in London.

What is your earliest memory of beatboxing?

2010 at the BAC Beatbox Academy with one of my brothers.

If you could work with anybody, dead or alive, then who would it be?

I would love to work with Viola Davis. She has been an idol of mine for years and it would be an honour to be in a production/film/show with her.

What made you start beatboxing?

I came along to the BAC Beatbox Academy with my brother one weekend as he had loved it and had been raving about how great it was. I loved creating music and singing anyway so thought “why not?” and gave it ago. Been going ever since.

Did you beatbox before joining the BAC Beatbox Academy?

Not at all. I heard my brother doing it around the house but I never thought I would ever be able to produce sounds like that myself!

What was your process for making this show?

We decided to celebrate 100 years of suffrage, and it so happened that it would be 200 years since Mary Shelley wrote Frankenstein so it was perfect! Shelley was a young writer (18), and as young creatives ourselves, this was incredibly inspiring to us. We often create songs through improvisation using a word as a stimulus, and so we broke down the themes of the story and created a whole bunch of melodies, raps and spoken word pieces around that. Through copious scratch performances and under the brilliant direction of Conrad Murray and David Cummings, we edited and refined, adding synchronised movement and our individual personalities, and our “monster” was born.

What would you say that you've learnt from performing this show, and from the Beatbox Academy in general?

I have learnt so much about myself as a person and my capabilities. I did not think I would ever be able to be a part of something so special and so well received. Being raised in a very deprived, working-class estate, you’re led to believe that these things just don’t happen to people like us. My confidence in myself has grown so much, resulting in my performing abilities improving beyond what I thought would ever be possible.

Do you plan to take beatboxing beyond the academy?

I already have! I work part-time with the Irene Taylor Trust teaching young people from disadvantaged backgrounds live music and they love it. I have also used it in shows outside of the Academy, as a solo performer and in a production with The National Youth Theatre.

Where can people see your show?

We are hoping to bring the show all over the UK and beyond but nothing is set in stone yet. Fingers crossed.

How can people find you online? 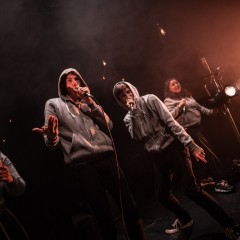 Interview with Glitch, member of the BAC Beatbox Academy

"Being raised in a very deprived, working-class estate, you’re led to believe that these things just don’t happen to people like us."