"I don’t look through newspapers and decide to write something. If an idea hits me like a ten ton of bricks and I need to drop everything to tell this story then I know it’s something important."

Hello. I’m Alex Gwyther, a writer and actor based in London.

I first performed here in 2013 with my first one-man play Our Friends, The Enemy. It was tough, tiring but so much fun, so demanding. I learnt a lot in that month and I wanted to come back again with a new one man play.

Edinburgh Festival is a jungle of live art like nowhere else on the planet. The buzz and vibrancy of the city is overrun with performances and it's a feeling like no other to be amongst that.

To be honest, I don’t think there was any motivation. I knew I always wanted to write and be a writer. I began by performing poems and spoken word in London and turned one poem I had into a theatre show.

Wishing I had my current job.

Trying to pee my name on the wall in primary school.

No pressure at all. I don’t look through newspapers and decide to write something. If an idea hits me like a ten ton of bricks and I need to drop everything to tell this story then I know it’s something important.

People are getting better, and becoming more aware of issues in the world. People want to change things and see change. This is great for theatre. I don’t think theatre has ever been so needed and so relevant. It’s so exciting.

It has been a rollercoaster.

Bruce Lee. Would love to write a film with him.

It must all boil down to money. Some performers do amazing on the Free Fringe and no doubt recuperate a lot of their expenditure back. Likewise, a lot of performers have a terrible time on the ticketed events. Realistically I think you have to decide what do you want from the Fringe, why are you bringing your show here and what can you afford? 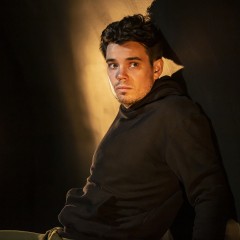 "I don’t look through newspapers and decide to write something. If an idea hits me like a ten ton of bricks and I need to drop everything to tell this story then I know it’s something important."