"Growing up in an isolated mining community there wasn’t much to see in terms of arts. Every Christmas the Nutcracker would be on CBC television and Mikail Baryshnikov was (still is) INCREDIBLE. Watch that man move. He’s unreal."

My name is Jennifer Irons. I’m originally from the Yukon Territory in Northern Canada and have resided in the UK for the past 20 years.

Because it’s the grand mammie of all festivals, isn’t it?

Growing up in an isolated mining community there wasn’t much to see in terms of arts. Every Christmas the Nutcracker would be on CBC television and Mikail Baryshnikov was (still is) INCREDIBLE. Watch that man move. He’s unreal.

I used to watch the halftime show at the Superbowl and be mesmerised by the thousands of people dancing all at once. I thought it was epic. Still do.

Lots of movies. And lots of music. So the main inspiration really came from music. Dancing around in the house to my parents’ exceptional record collection. I’m pretty sure I was the only 9 year old girl in the Yukon with a full knowledge of Gladys Knight and the Pips back catalogue.

This one. But I still want to choreograph the halftime show at the Superbowl.

Singing in the Christmas pageant in kindergarten when the milk from my lunchbox leaked and I was pulled off stage to clean it up. I was pissed because I was demoted from playing the bells to general chorus.

I kind of think that’s the point? I think I’m naturally inclined to vehemently share my opinion on current events! Doing it through ‘art’ makes me less annoying in the pub… right?

Hmmmm. More like I keep discovering all these new things I haven’t tried before!

The whole thing is a strange and wonderful undertaking. Free events are a good way to meet new people and find audiences that may not have found you. Ticketed events are harder to get people to part with their cash as there’s just so much to choose from and money is… well money. But for the artists, selling your show means you get to eat this week.

Train. Eat your veggies. And prepare your liver. 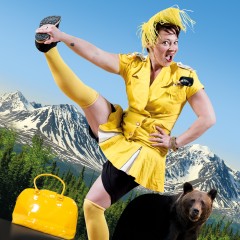 "Growing up in an isolated mining community there wasn’t much to see in terms of arts. Every Christmas the Nutcracker would be on CBC television and Mikail Baryshnikov was (still is) INCREDIBLE. Watch that man move. He’s unreal."