"I think the rise of the internet has created a space for my generation where there is no beginning or end to performance, and life and art are able to be so tied up together, which is both terrifying and liberating at the same time."

My name is Maisy Taylor and I'm an aerialist, actress and writer living and working in London. I graduated from The National Centre for Circus Arts with a 1:1 in 2015 and have since developed a fascination with female sexuality and its place in modern society as well as its relationship to performance.

I'm one part of Shasha & Taylor Productions, with the amazing Tamsin Shasha.

Everything I See I Swallow is an intimate story about a mother who finds out that her daughter has become famous on the internet by posting photos of herself naked and tied up in shibari (an ancient Japanese rope bondage art). The daughter finds this behaviour subversive and empowering and says she is taking charge of her body, but her mother, who is an artist herself and thinks of herself as progressive and open minded, is appalled. Using aerial rope, shibari, projection and music, it is a story about love, communication and information as our characters attempt to understand each other and the shifting attitudes towards feminism across the generational divide. It's directed by Helen Tennison.

I came to the Fringe a few weeks after graduating and loved it. I love the variety of work here and the vibrancy and friendliness of the place.

All the writers, actors and artists I love came here at the start of their careers and it feels so exciting to be walking in their footsteps.

My parents were circus performers so it's been in my life for as long as I can remember. I've always known I wanted to be an artist of some sort but my choice of degree was quite a difficult one to make. My inspirations are quite disparate, from companies like DV8 and Circa to writers like Sam Bain, Jesse Armstrong and Phoebe Waller-Bridge. I am often inspired by poems - our show title is actually a mis-quote from a Sylvia Plath poem (it's actually called "Whatever I see I swallow immediately"). I love electronic music too - I've had a lot of my best ideas listening to Floating Points or Four Tet.

I also find a lot of my creativity is born as a reaction to the world around me. The Internet and internet culture has had a huge impact on my work over the last few years, especially during the making of this show. I think the rise of the internet has created a space for my generation where there is no beginning or end to performance, and life and art are able to be so tied up together, which is both terrifying and liberating at the same time.

I hope I'd be working in TV in some capacity, ideally as a writer. Either that or I'd be getting some extremely niche PHD.

I love my job now. I think I'll continue performing for a few more years and then start directing or writing instead, but for now I'm exactly where I want to be.

I'm an only child and I spent the first six years of my life travelling with my hippy parents in boats and busses and trucks and trailers. I had a lot of free time and was constantly drawing and writing stories and putting on little shows for my parents. I don't know which is the earliest memory but there is a very embarrassing video that my mum and I made called “Wild Girl” which she recently put on YouTube and is probably there to see now if anyone wants a good chuckle.

I am a nude art model, I've worked in strip clubs and I recently acted in a porn film by Erika Lust, who makes "ethical pornography". I am very open about all of this on social media. The responses I get from the public feel like part of my research into where sexuality sits in society today. But I definitely do feel under pressure to be a social commentator on feminism. I try really hard to pick up on nuances and to present questions rather than answers. I want young women who see what I'm doing, to realise that it's okay to be curious and to ask questions, and that not everything has to be neatly articulated in order to be ok. I want to spark debate and it makes me really happy when people disagree with me.

Yes, I think the conversation is constantly evolving. I think there is a lot of polarisation at the moment though and I'd like to make work which might interest people who wouldn't normally engage with feminism.

My body, landscape for research

Naomi Wolf because I love her mind and the way she writes is phenomenal, even if you ignore the subject matter.

I don't know a lot about this but I would have loved to make our show free so that anyone could come to see it. Unfortunately we wouldn't have been able to afford to come to the fringe if we'd done that.

Do everything you can to make it happen because it is the most exciting thing in the world!

You can see Everything I See I Swallow at Summerhall Demonstration Room, from 31 July - 25th August at 18.00. For tickets please visit https://tickets.edfringe.com/whats-on/everything-i-see-i-swallow 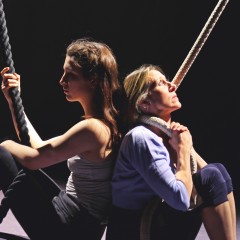 Interview with Maisy Taylor, co-writer and performer in Everything I See I Swallow

"I think the rise of the internet has created a space for my generation where there is no beginning or end to performance, and life and art are able to be so tied up together, which is both terrifying and liberating at the same time."