"I didn’t like my day job and a friend asked me what I like to do. I said I like to make people laugh. He said why don’t you try comedy? That was it."

My show is about overthinking, anxiety and sex.

Because no other festival offers the chance to perform for 1 month every singe day. The city is beautiful. The community of artists is amazing to be around and always leaves me inspired. The whole month is my favourite of the year. Like Christmas for artists.

Oh beyond what I said above? Everything is close enough you can walk to it. So you can do 100 gigs in a day if you like. You can still get away from it all and get some headspace if it drives you nuts as there’s a mountain within walking distance. Aside from the crazy cost of renting it’s outstanding a creative playground like no other.

I didn’t like my day job and a friend asked me what I like to do. I said I like to make people laugh. He said why don’t you try comedy? That was it. I signed up to Logan Murray’s excellent stand up and deliver course and after that I’ve never looked back (I look back sometimes when the gig went really badly).

I guess I just want to create things that are insightful and funny. So I don’t have to be on stage to do that. It could be in any format. And I try to stretch and play with the form as much as I can.

When I started I was not really inspired by anyone. I liked comedy in general (but mainly American sitcoms) but I didn’t really have a stand up hero. Since getting into comedy I’ve adored the work of Louis CK (although… in light of recent events I know a lot of performers avoid saying that publicly and I guess I should, but to deny he was an impact on me would be lying. I hate what he has done and the way he has handled it since but his style and writing was an influence). Since that I’ve loved the work of Bo Burnham, Bill Burr and (my number 1) Daniel Kitson. All three push the form and attitude of on stage persona’s to their extreme and manage to do it with flare, humour, self awareness and have created die-hard fan bases.

Well my current job is a writer and comedian. So I think the only skill set I have left after that is audio editing. So I’d be in podcasting more or radio. I wanted to be a pilot when I was younger but I got put it off by my parents when 9/11 happened and they were scared every plane was going to be taken out of the sky. So let’s put that as a backup.

Other than mine? Pilot. But a private one. For someone rich who might let me borrow the plane while they’re in meetings.

I fell off the side of a bouncy castle trying to save a friend who was on the top of a wall and about to fall. I threw him into the side where the floor was made of air in the castle but that made me fall onto a metal hook that was holding the castle in place and broke my arm. I guess that’s so vivid because it hurt so badly and I had to spend 12 hours in A&E with a bag of frozen peas on my arm with my mum moaning going to defrost and be “unusable”.

Kind of. I mean, comedy has the power and ability to make people reconsider their positions in a way debating and discussion does not. But I try not to. And when I do I try not to just say what I think the left-wingers will want to hear (a lot of arts festivals are full of people who are left-wing or who like to say they’re left-wing).

I see far too many comedians getting a laugh / clap from just saying something that everyone agrees with or is obviously just pandering.

Again, kind of. It’s made me more aware of saying certain things on stage. And certain jokes can be seen by different people in different ways. I actually have a whole bit in my show about being a white man and how that’ll colour your judgement and you need to be aware of public sentiment more than ever.

Daniel Kiton for comedy because I would love to get inside his mind.

Shane Koyczan for poetry because I would love to watch how he bends words.

Eminem for music because I would love to watch him tell a story from start to finish.

Brian Sella (from the Front Bottoms) for more music because he can say things better than I feel them.

This will massively depend on your budget, the type of show and your aims for the festival. Personally I do PWYW (pay what you want) where you can reserve a seat for £5 and you can come in for free if you rock up and there’s room on the door and pay what you feel it was worth on the way out.

This allows people who want to ensure they have a seat to reserve one but it also gets new people / fans(?). For me it’s the best of both worlds.But if you want to only charge fans (which I totally get) it helps you find your audience in a whole other way.

Go to the Festival the year before, scout out 3 rooms you like, feel comfortable in and the show suits and do it there. Also it’s best to go one year without a show to get a feel for it. 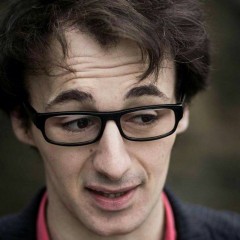 "I didn’t like my day job and a friend asked me what I like to do. I said I like to make people laugh. He said why don’t you try comedy? That was it."